Mexican studio MCxA Group took cues from a forested setting and an archaeological site to create a holiday home with "labyrinthine spaces" and a strong connection to the outdoors.

Casa Mague is located in the small town of Malinalco in Mexico's Ixtapan Region, about 115 kilometres south of Mexico City.

The area features lush vegetation, large trees and a 15th-century Aztec sanctuary called Cuauhcalli that was built into a hillside and is roughly shaped like a pyramid.

"We approached the project by asking ourselves: how do we create a construction with a contemporary language within a pre-Hispanic context, which manages to merge with the natural and cultural environment and fully respects the existing vegetation?" the studio said.

The architects conceived a rectangular block that is broken up into discrete volumes and terraces that are linked by corridors. The house was designed around existing trees, resulting in a maze-like quality.

"No roots, trunks or branches were affected," the team said. "In this way, labyrinthine spaces emerged, continuously changing one's perception according to the light and time of day."

The home is laid out to provide a separation between public and private functions. The architects emphasised that spaces were designed to be highly adaptable, which "worked perfectly during the times of Covid-19," the studio said.

The west side of the dwelling holds four bedrooms, while the central and eastern portion encompasses communal spaces.

One of the lounge areas features a curved wall made of wooden blocks, which alludes to the Aztec sanctuary "Piramide de Malinalco".

On the far east end of the plan, there is a gabled greenhouse-like structure that is placed at an angle.

Inside, one finds a kitchen and a dining area fitted with a long wooden table. The glazed enclosure provides the feeling of eating outdoors. 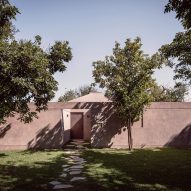 Throughout the dwelling, the team used natural materials such as wood, stone and chukum, an ancient type of stucco.

"Mirrors around the facades make the building light and continuous, creating a seamless integration with the surroundings and the local architectural culture," the team added.

The team noted that the dwelling has three layers – its base, walls and roof, set within a tree canopy. These layers draw upon a tree's structure and spiritual associations.

"The concept is based on the Mesoamerican worldview, where trees have a ritual meaning," the team said.

Other vacation dwellings in Mexico include a pair of identical homes by Taller ADG and Estudio MDB that sit on a steep hillside in Valle de Bravo, and a partly sunken home in Salazar by Manual Cervantes Estudio that is made of concrete, wood and rugged stone.

The photography is by Brenda Gabriela Islas Camarena.