Dutch startup Lightyear has unveiled its Lightyear 0 electric car that has solar panels covering its roof, bonnet and boot so that it can be charged while driving.

In total five square metres of curved solar panels were integrated into the Lightyear 0 car's roof, bonnet and tailgate, which will convert renewable solar energy into electric power for driving.

The car is powered by traditional electric charging and solar power, meaning people would be able to drive while simultaneously charging from sunlight.

"Through Lightyear 0, we are offering a new future for motorists who want the freedom of mobility with the peace of mind of sustainable energy, and that future starts now," said the brand.

"After six years of research and development, design, engineering, prototyping and testing, this premier solar car is slated to go into production this fall."

Tests undertaken by Lightyear estimate that the solar cells can add up to 70 kilometres (44 miles) per day to the car's 388-mile range from traditional charging.

In sunny climates such as Spain or Portugal, the brand said that an average driver covering  35 kilometres (22 miles) per day could use the car for seven months without it needing to be charged at a public or household outlet; in colder climates such as the Netherlands, it could last for two.

"In optimal conditions, this enables Lightyear 0 to power itself with 70 kilometres of range per day on top of its estimated 625 kilometres Worldwide Harmonized Light Vehicle Test Procedure (WLTP) range."

Difficulties recharging electric cars – often referred to as "range anxiety"  – and finding convenient and available charging stations is a major reason that puts people in the UK off purchasing or using an electric car.

The British government has attempted to counter this problem with legislation that will require all new homes non-domestic buildings in England to have electric vehicle charging points. 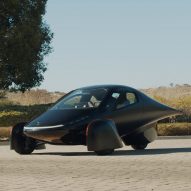 Lightyear hopes to combat this with its car that charges while drivers are on-the-go.

A user interface on the car's touchscreen dashboard gives users cloud-based updates as they drive including charging status, how much solar energy is being absorbed and which panels are soaking in the sun's rays at any given moment.

When plugged into a regular household power socket, drivers can charge over 300 kilometres of range overnight, according to Lightyear.

"Plugged into a regular home socket, Lightyear 0 can still charge two times faster than a comparable electric vehicle with a similar battery size," explained the brand.

Measuring five metres long and weighing 1,575 kilograms, the four-wheeled sedan, which has a top speed of 160 kilometres per hour can accommodate five passengers.

Lightyear 0's body is made from panels of reclaimed carbon fibre and aluminium. Instead of mirrors, Lightyear 0 has four cameras: one for rearview, one for parking and two side cameras.

The interior of Lightyear 0 is made from vegan and naturally-sourced materials such as ecological microfiber suede seats and rattan palm detailing.

Lightyear plans to produce 946 Lightyear 0s this year. It said that its next model, which is being designed for high volume production in late 2024 will come at a more affordable starting price point of €30,000 (£25,915).

In recent years there has been a surge in interest in cars that use solar energy. German car brand Mercedes Benz partnered with the late fashion designer Virgil Abloh on a solar-powered electric car with a transparent front bonnet.

German automaker Audi has collaborated with Chinese solar-cell specialist Hanergy to develop thin solar panels that can be integrated into car roofs.