Named JINS Park, the shop in Gunma Prefecture was designed to act as a space for the community to gather whether they are shopping in the store or not.

"We proactively created public spaces that are not part of the sales floor, which encourages community members to come for reasons other than shopping," the studio explained.

"In stores of this type, the second floor is typically not open to customers, [we] utilised it as a terrace and also included a bakery-cafe in the store."

Yuko Nagayama & Associates envisions the space being used as an indoor community plaza with food and coffee served along with glasses being sold.

A large triangular staircase divides the space in two, with the glasses store located on one side and the cafe on the other.

The widening staircase, under which the cafe's servery and the shop's consultation rooms are located, leads to an additional seating area and a triangular, outdoor terrace.

This space is intended as another community area, offering benches and a generous amount of open space where children can run around.

Broadly lit by floor-to-ceiling windows with the roof supported by angled columns, the interior is broken up by a number of freestanding timber units.

For the eyewear shop, these are used to display the glasses on sale, while for the cafe they contain pastries and other food

The trapezoidal building is topped with a sulphurised-copper facade that was designed to mimic the reddish-brown Mount Akagi that can be seen from the shop.

Visitors approach JINS Park through a neatly landscaped garden, before being greeted by the central fan-shaped staircase which provides seating with views of the store, garden, and street. 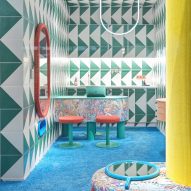 "We began by reversing the typical layout of roadside stores, with a parking lot located in front, and instead located the parking lot behind the building," said Yuko Nagayama & Associates.

"As the landscaping matures and the copper facade blends more fully into its surroundings, we hope the store will become part of everyday life in the neighbourhood," said the studio.

Other recent developments include eyewear stores by Child Studio for Cubitts, a company that asks for each shop to be designed in a unique style that reflects the history of its local neighbourhood. The studio's Leeds store is inspired by Victorian joinery, whilst another store is based on Soho's colourful postwar reputation.