The way that daylight plays on bricks served as the starting point for this neutral-toned restaurant interior, which architecture practice Plantea Estudio has completed in its hometown of Madrid, Spain.

Located in the city's Salamanca neighbourhood, Hermosilla is a 210-square-metre restaurant serving Mediterranean-style dishes made from local artisan produce alongside a small list of low-intervention wines.

To complement the menu, Plantea Estudio said it wanted to create a "timeless" interior for the eatery that eschews trends and fads.

"We were looking for a composition that was specific to this space, making the most of its qualities," said the studio's co-founder Luis Gil. "The aim was to achieve a little emotion with the minimum of artifice."

Hermosilla occupies a corner unit on the ground floor of a multi-use building by modernist Spanish architect Luis Gutiérrez Soto that was completed in 1952.

As a starting point for the restaurant's interior scheme, Plantea Estudio looked to the earthy tones of the building's dark red-orange bricks and the way they subtly change colour as the light shifts throughout the day.

"The main idea was to colour the environment with various complementary tones that reinforce this broad, natural spectrum of light and colour," Gil explained.

"The colours are enlivened and distinguished from each other or tempered and blended, depending on the moment." 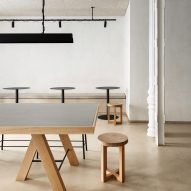 The studio said it also hoped to "emphasise the power of the building" by creating a textured, cave-like interior that celebrates its original concrete, brick and plaster structure as well as the wooden flooring.

These historical materials are seamlessly blended with new additions such as the curved wall that encloses the pizza oven, the coral-red marble worktops and washbasins, and the dark wood accents found in the fixed furniture.

To temper these darker tones, Plantea Estudio specified a light birchwood version of Alvar Aalto's Chair 69 and aluminium seats by Danish company Frama, which the studio likens to vibrant "accessories".

Similarly, white lighting fixtures designed by modernist architects Arne Jacobsen and Charlotte Perriand serve as bright accents, while two fig trees were added to emphasise the height of the space.

Plantea Estudio was founded by brothers Lorenzo Gil and Luis Gil in 2008. Since then, the studio has renovated 30 houses and designed more than 25 restaurants, including the minimalist Madrid street food restaurant Zuppa.

Other projects include offices, art galleries, shops and a multi-purpose theatre that was formerly an adult-film cinema.

The photography is by Salva López.