Wooden slats wrap around indoor and outdoor gathering spaces for an angular pavilion in Winnipeg's Crescent Drive Park that can be "submerged without decay" during floods.

Called Forest Pavilion, the structure was commissioned to offer basic amenities such as restrooms and covered gathering areas in Crescent Drive Park, a public park on the Red River in the sixth-largest city in Canada.

Local studio Public City Architecture, which is led by Liz Wreford and Peter Sampson, designed the project as a "hub that supports visitors of all kinds."

"As a multi-functional civic asset, it creates opportunities to respond to Winnipeg’s emerging cultural and climatic landscapes," the studio explained.

Some of the climactic issues that the pavilion seeks to address include the flooding of the nearby river, which led the team to locate the building at the highest point of the park and to ensure the materials used would resist occasional water level rises.

"The Pavilion is the first civic structure of its kind to apply FEMA flood-protection design standards," said Public City Architecture. "All materials below the flood line can be completely submerged without decay," it added.

Given Winnipeg's marked variations in climate, the architects created several spaces that offer respite to park visitors from different temperatures.

For example, a covered walkway cuts through the pavilion and was dubbed the "shade room," as it offers protection from the city's increasingly warm summer temperatures.

There is also an enclosed and insulated room that can be used for warming up in the winter or seeking shelter from occasional rain storms.

The inside of the pavilion also includes public restrooms.

The wooden battens that line the walls of the structure are meant to recall the pattern of trees in a forest.

They are individually attached to the building structure, a feature that the architects claim facilitates upkeep, as a single piece can be replaced when necessary. 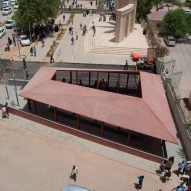 At night, light from within the pavilion is screened by these timber staves, giving it a glowing appearance.

"Highly visible from throughout the park, the Pavilion dissolves day to night from a wooden form to a lantern-like void," said the architecture studio.

"Its vibrant chartreuse Venetian plaster interior offers a dramatic welcome to visitors at night, like a porch light in the forest," they studio added.

The Forest Pavilion opened in 2021. This year, it was awarded one of the Governor General's Medals in Architecture. This distinction is awarded to projects by Canadian architects that exemplify good design.

Other park projects include a playground in Denmark that contains "whimsical" marble play structures and a park in Taiwan by ECG International Landscape Consultants that retains certain historical elements from its former use as a sugar factory.

The photography is by Lindsay Reid Studio.