Named Bakrajo House, the three-storey dwelling was designed to maximise the sense of privacy for the client while still feeling open and spacious.

To achieve this, the front facade's flowing shapes "embrace" the entrance and a series of thin windows, creating small alcoves that protect them from overlooking while still allowing light into the home.

Some of these alcoves create balconies or shade small terraces, while others have been used to create small planters.

The form's shape is mirrored inside with curving white walls and embedded ceiling lighting that follows the outline of the form's shape and a living area that opens onto a garden courtyard at the rear of the home.

"The house looks so solid and introverted from the outside but from the inside it is open, spacious and naturally well-lit," said Zakaa.

"It was really important for us to provide a sort of privacy to the family where they can sit wherever they want without being seen by anyone from the outside or the need for curtains," it continued.

A large living, kitchen and dining space occupies the ground floor, alongside a white metal staircase against a stone feature wall that separates it from a bathroom and bedroom.

Above are a further four bedrooms, two at the rear opening onto a balcony surrounding the small garden spaces and two at the front with access to two small balconies wrapped in the folds created by the facade's form. 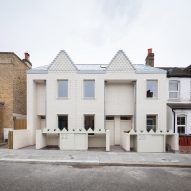 "The facade is not a direct extrusion of the floor plans, but rather we wanted to make an architectural statement," said the studio.

"We used the alcoves to let light and air enter the house in different directions."

Based in Sulaymaniyah, Zakaa responds to what it sees as a predominantly function-led approach to architecture in the region due to ongoing instability and conflict with a focus on "aesthetic beauty."

"In a country that is in a constant state of destruction and rebuilding because of the never-ending wars and economic instability, architecture is not something that people care for," it said.

"We hope [Bakrajo House] stops passersby for a moment to enjoy the unorthodox form... and maybe give them a new perspective."

Other projects proposed for the region include The Kurdistan Museum in Erbil by Daniel Libeskind, for which provisional plans were revealed in 2016.

The photography is by Deed Studio.