Architect Nicholas Burns has hidden a chapel made from concrete amongst trees and granite boulders on a large private estate in northern Portugal.

Fittingly named Chapel and Meditation Room, the project was commissioned by the estate's owners who wanted a space for both private and group reflection within the grounds.

Australian-born and Bali-based architect Burns was given full rein on its design and location within the thirty-hectare site.

Burns decided to build the chapel on a knoll bounded by gullies and covered in rocks and dense foliage, which grants it a protective and isolated feeling.

Its form responds directly to this setting, with a curving exterior that slots between the boulders and tree trunks. While minimising damage to nature, this is hoped to make the chapel appear as part of the landscape.

"The idea that the landscape will grow around and envelope the building over time and become part of it," Burns told Dezeen.

"The volumes of the various spaces were constrained by the location of the boulders and trees," he continued.

"The height was determined by the height of the trees growing in a few years and becoming taller, concealing the highest point of the building."

Burns chose concrete as the primary material for the Chapel and Meditation Room for its "plasticity", which allowed him to achieve its continuous, sinuous form.

It also provides the building with a "neutral, consistent surface inside and out", Burns said, which retains focus on the landscape.

On the northeast side of the building, the concrete structure gives way to walls of locally-sourced slate that provides niches for moss and lichen to grow over time.

These slate walls enclose a small meditation room, courtyard and a series of reflective pools that cast ripples of light across the site.

The entrance to the chapel is marked by a contrasting weathered-steel box, which is elevated slightly above the ground and leads into a triangular porch.

From here, there are a series of steep steps that lead up into the chapel's nave, or its main gathering space.

The chapel contains room for 60 seats, as well as areas for standing. It is softly lit by slim windows and candlelight, while solid Portuguese limestone slabs are used to line a number of surfaces for a warm finish. 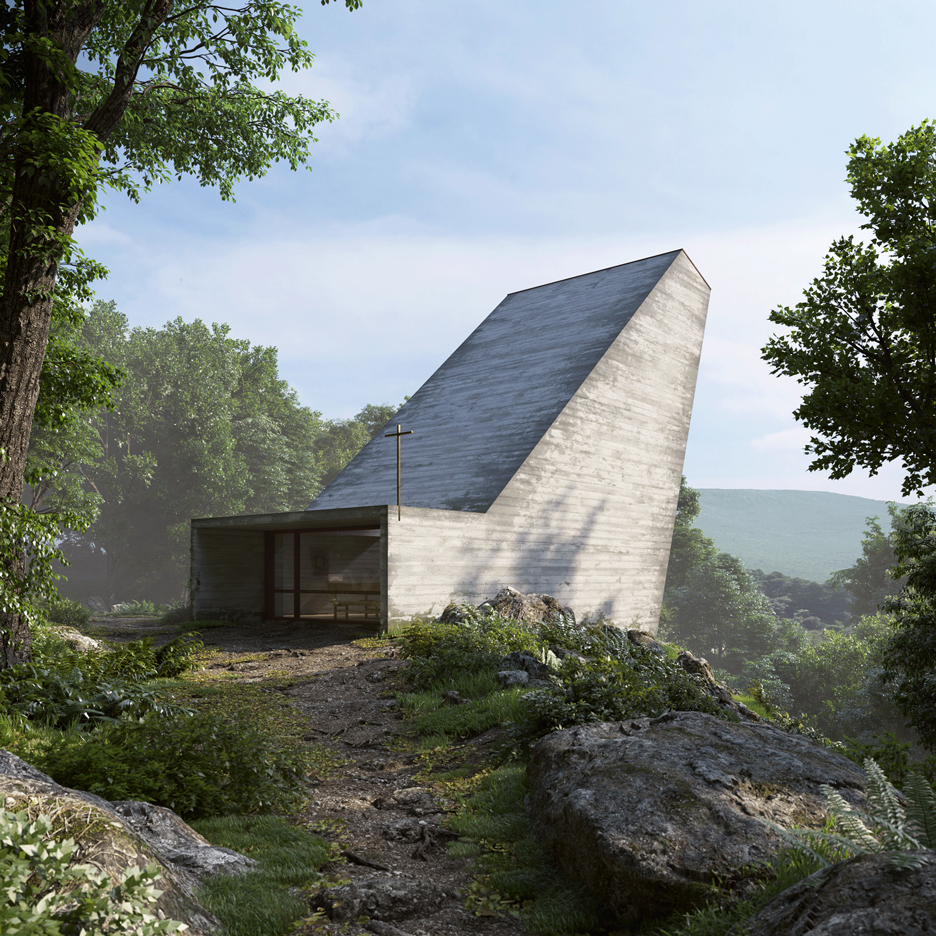 One of the only decorative elements of the chapel is an 18th-century altar, which was previously owned by the client and formed a key part of Burns' design.

Framed by the curve of the chapel's ceiling, this antique block is made from carved timber and features gilded reredos – a type of decorative screen placed behind an altar.

On the left of the nave, an arched doorway leads out to the courtyard hidden by the slate walls and, beyond it, the meditation room.

The meditation room has a rougher material palette than the main chapel, lined entirely with dark wood. However, both spaces are designed with very few windows to provide visitors with a feeling of "abstraction".

The only areas of glazing throughout the Chapel and Meditation Room are tall and narrow, positioned to allow the early morning and late afternoon sun to enter, while framing specific views of the building's natural surroundings.

The project is complete with minimalist furniture pieces, including light wood chairs designed by Burns' studio and stone candlesticks throughout the nave that contain candles handmade by his son.

Concrete is a popular choice amongst architects designing places of worship. In Slovenia, architecture studio Enota used the material to construct a series of sloping volumes that form an open-air chapel.

Architecture firm Studio 512 also used the material to create a chapel in Texas, which rises up on one side to form a pointy volume evoking a steeple.