Architect Álvaro Siza Viera has completed a simple countryside chapel in the south of Portugal, designed to function without electricity, heat or running water.

The Capela do Monte, which translates simply as hillside chapel, forms part of the Monte da Charneca complex, a new off-grid holiday retreat that is being constructed in the picturesque landscape of Portugal's Algarve region.

The entire development will be self-sufficient, so it made sense for the chapel to be planned without the need for external services.

Instead, the building is designed to naturally heat and cool itself passively, thanks to the use of carefully selected materials. Its thick walls are made from perforated bricks, which are coated both internally and externally in a limestone render.

Siza describes the chapel as "a pure architectural project".

It is the first the Pritzker Prize winner has completed in the Algarve – his most famous projects, such as the Boa Nova Tea House and the Leça da Palmeira swimming pools, are all further north.

Accessed only by a single footpath, the chapel's most distinctive feature is its simple U-shaped facade, which fronts a terrace that is raised up from the hillside.

Set behind this facade is an opening that allows sunlight to filter down into the building's open-air entrance lobby.

Once inside this space, visitors are greeted by three bespoke tile murals, manufactured by Portuguese manufacturer Viúva Lamego. Based on sketches made by Siza, they depict different scenes that tell the story of Jesus' life.

Inside the minimalist chapel are more tiled surfaces, but here they are left without embellishment. Similarly, the other wall and floor surfaces are pale in tone.

The only colour in the space comes from a series of wooden furniture pieces, all designed by Siza. They include an altar, a bench and a series of chairs, all built by Porto-based carpentry studio Serafim Pereira Simões Sucessores.

There is also an abstraction of the traditional cross, which forms a T shape against the rear wall of the room.

The Monte da Charneca Center is being created by a couple who have lived in the area for over 30 years.

It started with the rehabilitation of seven traditional houses, which now boast their own water supply, solar-powered electricity and an orchard that produces olives, citrus fruits, figs and almonds.

The couple have asked Siza to oversee the materplan for the next phase of the site's development. As well as the chapel, which opened in the spring of 2018, he will add a series of other facilities, including more residential buildings. 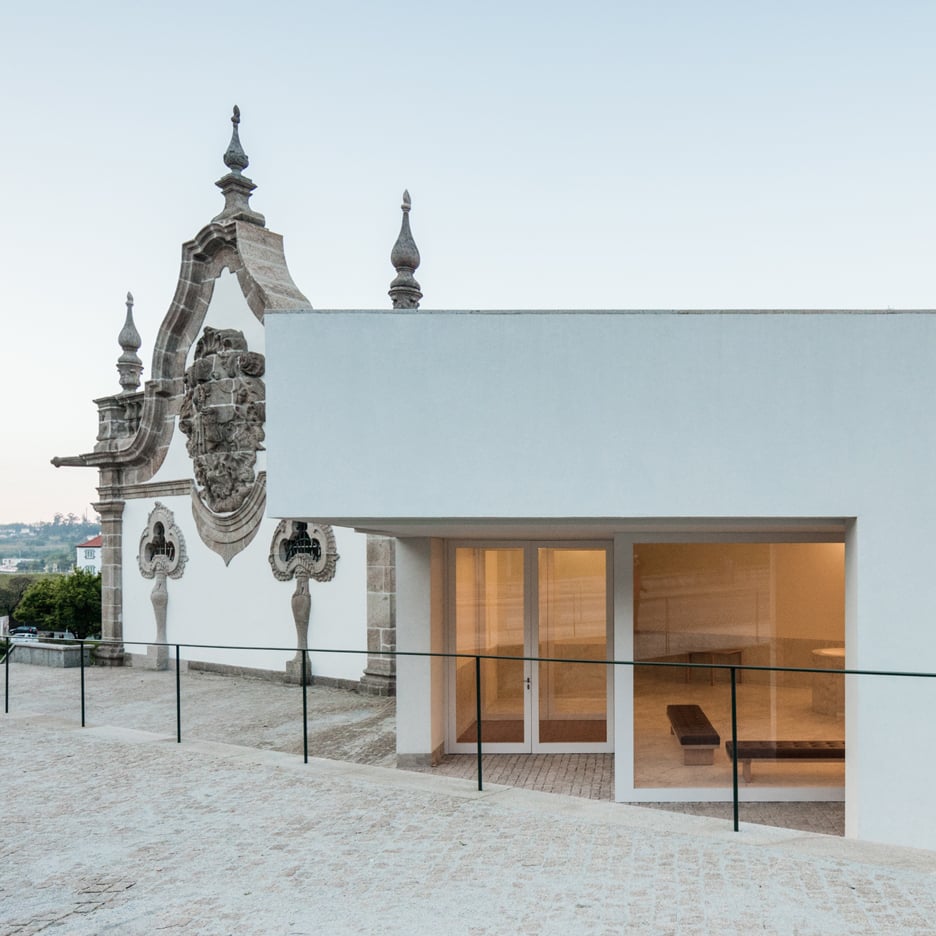 The aim is to create a retreat that promotes the region's agricultural heritage to tourists. The entire project is due to be complete by 2021.

One of the world's best-known architects, Siza ranked at number 91 on Dezeen Hot List 2017. Although the past few years have seen him start to build up his portfolio abroad, he is most celebrated for projects in his native Portugal.

His other recent completions include the Nadir Afonso Foundation in Chaves and the overhaul of the Municipal Museum Abade Pedrosa in Santo Tirso.