Morrell set out to create a design in response to rising sea levels for his final-year project at Northumbria University. After he read that more than 19,000 children drown annually in Bangladesh – an average of 53 a day, and worse during the flooding season – Bot began to take shape.

"I started researching into the effects of rising sea levels, flash floods and flooding in general as where I live in the UK suffers from quite severe flooding," Morrell told Dezeen.

"That's when I saw how severe the problem was in countries like Bangladesh and other Asian countries and from there, I felt like I would be able to do something that could provide aid," he continued.

A key part of Morrell's design is that it involves the large fast fashion companies that manufacture in the region. They would make and distribute the Bot lifejackets on a charitable basis, using their fabric waste.

According to Morrell, these companies currently tend to burn their waste material, to the detriment of the environment, or to sell it cheaply for insulation. By comparison, Bot represents a high-value solution that could cost the companies minimally.

"The fashion industry in Bangladesh houses 7,000 factories and employs four million workers," said Morrell. "They take so much from the country and pay the people that they hire an unfair wage."

"These companies also currently give very little back to the people of the country when problems, in some cases, could be solved with very simple solutions." 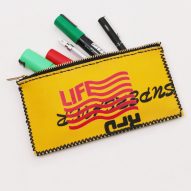 The designer spoke to representatives from clothing companies such as Primark as part of the project and said they have indicated that such a charitable scheme could be viable for them.

For buoyancy, Morrell made use of another resource that is abundant in the region – plastic waste. Four empty plastic bottles need to be inserted into the vest to turn Bot into an effective flotation device.

This design keeps costs down, means almost any fabric can be used, and makes Bot compact for easy distribution. The vest on its own rolls up to a size smaller than a 500-millimetre bottle, so Morrell suggests it could be packaged within a multipack of bottles for distribution.

Bot can be made using a single sewing machine and six patterns, and is secured using a low-cost buckle. This could also be further simplified with two straps or a belt that can be tied in a knot instead.

Morrell, who was in Northumbria University's Design for Industry bachelor programme, tested the product in Kenya, England and India.

Other designs for disaster relief have come from creative agency Red Antler, which created emergency kits called Judy, and design studio Nendo, whose back-up portable battery can be charged by swinging it around.