The Neural Sleeve is designed to be wrapped around the leg and uses functional electrical stimulation (FES) to help with the walking difficulties that can be caused by multiple sclerosis, cerebral palsy, spinal cord injuries and strokes.

"Think of it as a way to sort of remote control your own leg," said Béhar, who worked with Cionic to make the FES technology usable and scalable.

"What the algorithms do and what the electrodes do is they deliver that right sequence. And when the brain has relearned and re-acquired the knowledge of how to fire those muscles, the sleeve is not needed anymore."

The wearable consists of a lightweight fabric sleeve that wraps around the user's leg, holding a series of electrodes in place above the muscles.

A receptor module, tucked away in an integrated pocket on the thigh, picks up information on the user's gait pattern and transfers this to the electrodes, which stimulate the muscles to elicit micro-corrections in their movement.

The whole process is managed by an app, allowing the user a degree of control over the process.

"Building bionic clothing that can augment human movement takes a thoughtful and holistic approach," said Cionic founder Jeremiah Robison, who developed the product after witnessing the walking difficulties his daughter experienced due to cerebral palsy.

"It starts with advanced technology capable of adapting to each user's mobility needs to deliver meaningful outcomes." 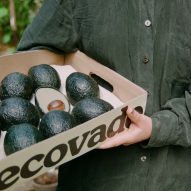 Béhar said the project was challenging because the electrodes had to be placed precisely while also ensuring that people with limited mobility find the device comfortable and easy to put on.

This is what informed the sleeve's wrap-around design, which is fastened in place using a simple Velcro closure.

Production of the Neural Sleeve began with 50 prototypes that were used in a controlled situation for a year of testing.

The initial trials targeted foot drop, meaning difficulty with lifting the front part of the foot. The tests saw an average improvement of nine degrees of movement for participants, which Cionic says is clinically significant.

To stop the wearable from feeling too much like a medical product, Béhar and his team created a variety of different colourways for wearers to "show off".

"We want it to be something that people celebrate," he said.

The Cionic Neural Sleeve was recently cleared by the United States Food and Drug Administration (FDA), and deliveries will begin in 2023. 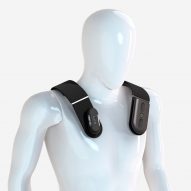 Cionic believes that this technology could also be carried over to other areas of the body.

"With more than 35 million Americans living with mobility impairments, the need for customisable full-spectrum solutions is growing – particularly within the ageing population," the company said.

Fuseproject and Cionic have been collaborating on medical and wellness technologies for more than a decade.

Yves Béhar founded Fuseproject in 1999 and has since created a number of products for people with limited mobility, including a collection of clothing with "electric muscles" for the elderly.