The Ecovado contains a pale green, creamy foodstuff made from a combination of ingredients local to its country and packaged in a fake avocado skin fashioned from wax.

Shokouhi, who is a recent graduate of London school Central Saint Martins' masters in Material Futures, created the product to help people reduce the amount of avocado they eat while still indulging their cravings for its flesh.

"However, avocado production is energy-intensive and resource-intensive: each avocado requires 320 litres of water to grow and harvest internationally."

"Avocados are one of the most unsustainable crops to export because of their delicate, easy-to-bruise nature, and the plantation-style monoculture farms required to meet the global demand for avocados are driving the deforestation of some of the most diverse landscapes in the world."

To come up with the Evocado recipe, Shokouhi worked with food scientist Jack Wallman from the University of Nottingham's Food Innovation Centre. He helped her identify the chemical and molecular composition of avocados and showed her how to go about finding suitable replacements.

The Ecovado she made for her final-year project is designed for the British market and employs primarily broad beans, hazelnut, apple and rapeseed oil.

Shokouhi says approximating the flavour and texture of avocado with only local, natural, low-impact ingredients was a huge challenge. 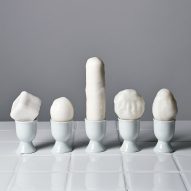 "The flavour of avocado is quite subtle and, overall, is most often described as 'creamy'," Shokouhi told Dezeen. "On the other hand, broad beans can contain quite a lot of bitter compounds called tannins and can have a beany flavour caused by lipoxygenase."

"To reduce the bitterness, we reduced the amount of broad beans in the recipe," she continued. "The flavour of avocado has been described as 'nutty'. So we used creamed hazelnuts which would bring a good amount of fat, adding to the creaminess."

Sometimes seemingly ideal substitute ingredients – such as olive oil, which is similar to avocado fat – could not be used because they came from too far away.

"Instead, cold-pressed rapeseed oil was selected due to the wide availability of UK-grown products and the similarity of its fatty acid profile to avocado," said Shokouhi.

Shokouhi's finessed recipe is encased in a realistic faux avocado skin made from wax and coloured with food colouring. The packaging is biodegradable and compostable, and can also be upcycled into a candle should the consumer choose to get crafty.

The Ecovado also contains what looks like an avocado stone. Shokouhi experimented with many options for this, including a wooden ball, which was ruled out for being a waste of material, and a recycled-paper "seed ball" that could be thrown into the garden to sprout wildflowers.

However, she decided the most "uncomplicated" option was best and so the Ecovado features a whole nut – either a walnut, chestnut or hazelnut – at its centre.

Other innovations in food design that have come from design students include Holly Grounds' dissolvable flavoured ramen packaging that wraps around the noodles and Annie Larkins' unusually shaped alternative to chicken eggs.