Northumbria University graduate Harriet Almond has developed a prototype for a detector that can sniff out the gases released by decaying food and suggest ways to use the ingredient depending on its freshness.

Snoot's playful, zoomorphic design consists of two parts – a handheld sensor resembling a snout and a small mouth-shaped printer that spits out recipe suggestions based on the information gathered by the aroma detector.

By assuring people that their food is still fit for consumption and educating them about its potential in a fun and approachable way, Almond hopes to find a way to cut down on the 4.5 million tonnes of edible food that are thrown away in the UK every year.

"There is a negative perception that as food gets older, it is bad or not as beneficial to us," she told Dezeen. "But that is simply not true."

"Food is perfect for so many different things at different points in its life, so showing people the possibilities of food through recipes and advice allows for its full potential to be realised and reduces unnecessary waste."

Snoot's sensor consists of an off-the-shelf aroma detector and a small camera. These work together to collect data about the food and its freshness that is then processed by a single-board Arduino microcontroller.

Almond's current prototype can only detect ethylene, the volatile organic compound released by bananas, apples, potatoes and a range of other fruits and vegetables as they decay.

But future versions of the product could integrate multiple detection modules for different gases so that it could be used for all types of food – as long as they are fresh rather than dried or preserved.

"I only have a proof of concept for fruit but there is enough research out there to suggest that it should work for all food types," Almond said.

"Aromas are one the most accurate methods of detecting food conditions, as even expiry dates rely on the correct storage practises of the user, whereas aromas will always show how close food is to its expiration."

Using this information, Snoot then shares suggestions on how the food should be prepared in order to extend its life.

For her prototype, Almond demonstrated this idea with the example of bananas, which release more ethylene than most foods, and developed quick, easy recipes based an different levels of the fruit's freshness together with a zero-waste chef.

An underripe banana, for example, could be fried with some sugar and cinnamon to bring out its sweetness, while an overripe one could be blended together with cocoa powder and frozen to create ice cream. 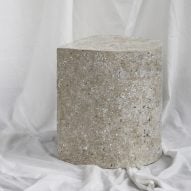 For the prototype, these recipes were inputted manually and randomised within different freshness bands. But a more advanced version of Snoot could have access to an entire bank of recipes and advice in the cloud.

This would also include information on how to preserve food to make it last longer if it can't be used right away.

"There is a big gap in knowledge around freezing and defrosting food safely, how long it should be frozen for and what food is suitable," Almond said. "Snoot aims to aid this gap in understanding by providing exact instructions of how to freeze food safely."

Rather than being displayed digitally, all of this information is printed on little receipts in the hopes that the satisfying physical interaction will spark curiosity and affect actual behavioural change in the user.

"A tangible solution is far more memorable and combined with providing a personalised recommendation to someone, the user is far more likely to follow through on using the item of food," Almond said.

"Tangibility also creates greater cognitive connections, meaning the user is more likely to apply the knowledge they have learned on how to use and preserve food in future situations, reducing their food waste."

British supermarkets, including Morrisons, Co-op and Marks & Spencer, have recently started ditching the expiry dates on some of their products due to the unnecessary waste they cause.

Almond believes that if Snoot was fully developed and put into production, it could be used as a way to help consumers make informed decisions in lieu of this labelling system.

"Perhaps it could provide an alternative way of judging food freshness as well as instilling a level of confidence that your food is still alright to eat in place of these dates," she said.

A growing cohort of designers is working to prevent food waste from going to landfills, where it releases carbon dioxide as it degrades and is singularly responsible for eight to 10 per cent of global emissions.

Carolina Härdh has created seating for Gothenburg restaurant Vrå from its own seafood waste while Milan practice Studio.traccia has used different types of leftovers to form an entire dining set-up from the table to the crockery.