A pair of skyscrapers designed by architect Frank Gehry that contain residences, retail spaces and a hotel have opened in Los Angeles across from the architect's famous Walt Disney Concert Hall.

The Grand complex occupies a full block in downtown Los Angeles directly across the renowned Walt Disney Concert Hall, which Gehry completed in 2003.

"From the start, our mission was to create a project that had a human scale to it and one that was a good neighbor to the buildings around it," said Gehry.

Two faceted structures rise out of a base that houses retail spaces and other amenities for the block, while a large outdoor courtyard between the two buildings is oriented towards the Walt Disney Concert Hall.

Both of the towers have cubic sides that stack and are staggered as they reach their full heights. The towers have an L-shaped profile to frame the central courtyard.

The tallest of the two structures – with 45 storeys – holds the complex' residential spaces. It has 436 rooms, with 20 per cent of these set aside for affordable housing.

These spaces include the lobby, a series of lounges on the 10th floor, a business centre and a fitness area.

"Our approach to the interior design of the amenities was sculptural and organic, celebrating and pairing Gehry’s big, bold architectural masses with a light and airy palette, travertine, walnut millwork, teak panels, and pops of jewel tones," said the Rockwell Group.

To complement this, the Rockwell Group included a teak panel wall inlaid with a "scribble" based off of Gehry's sketches for The Grand.

New York designer Tony Ingrao led the design of the bespoke residential rooms, which range from studios to three bedrooms.

The residential tower's lounges and amenities spaces have a number of outdoor areas that take advantage of the roof space, enabled by the stepped blocks of Gehry's overall design.

A courtyard that connects the two towers features public social space and a platform to view the light displays that periodically happen on the side of the Walt Disney Concert Hall.

Both of the towers stand on bases that were designed to match the character of the streetscape. A series of columns and negative space beneath these structures open up the central courtyard to the street.

The second tower, with 28 storeys, houses the Conrad Los Angeles hotel, which has interiors by British interior designer Tara Bernerd.

The 305-room hotel was designed to respect the intricacies of Gehry's design while also referencing the breezy luxury of West Coast modern design.

"We call it more of an urban resort," Bernerd told Dezeen.

Bernerd aimed for her design to respect the tall ceiling and cavernous envelopes of the Gehry design while giving the hotel a human scale.

"It's an honor and a privilege to work with Frank Gehry, and we didn't want to do anything that screened out something or didn't fit," she continued. 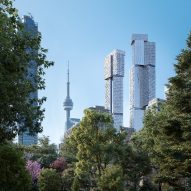 The hotel features lots of stone, tile and warm wood textures, with special attention given to the rooms and public areas that have windows looking out into the concert hall and city beyond.

Developed by New York real estate company Related Companies, the masterplan for The Grand was first put forward in 2006, only to be rejected by the city. The present iteration of the design was put forward and accepted in 2018.

Gehry was born in Canada and now runs his studio, Gehry Partners, which completes projects internationally.

Besides the Walt Disney Concert Hall, which Gehry has described as a "living room for the city", the architect has designed a number of other projects in Los Angeles, where his studio is based.

These include the Colburn Center, directly adjacent to The Grand, which is still in the design stages, as well as a headquarters for the Children's Institute that Gehry designed pro bono.