The UK's Crafts Council has unveiled the winners of its Craft School: Yinka's Challenge competition, which was developed together with London designer Yinka Ilori to help children explore empowerment through craft.

The British charity's competition, which was open to schools across the UK, aimed to celebrate "making by young people" and explore how craft can be a tool in which to reflect on diverse cultures and identities.

Children aged five to 16 were invited to explore themes of play, storytelling and empowerment through craft, with six winning projects chosen by Ilori from 100 entries.

"We wanted learners to really feel confident to explore their own idea of craft and creativity by using different materials in a way that gave them their own creative signature and outcome," said Ilori.

"Learners were asked to complete 10 hours of making towards a final model," he continued.

"We wanted them to have the opportunity to explore different craft materials and practices, with tons of hands-on making and most importantly letting them enjoy experimenting!"

The winning projects are currently on display at the Craft School: A Summer of Playful Making exhibition in London.

Among the winners are Matilda Tuck of Southborough CofE Primary School in Tunbridge Wells, who created an upcycled chair in bold colours that was designed to reflect her interest in music. 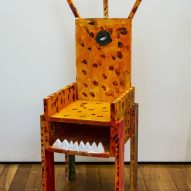 Students from Richard Cloudesley Special School in Islington also won for their hanging mobile made with reclaimed materials, including CDs and felt.

Fatima Tabib and Shreya Jondhale from King Edward VI Camp Hill School for Girls in Birmingham repurposed a drinks bottle to represent the concept of freedom and "spreading your wings".

Also among the winning projects was a zen garden, created by Eko Pathways in East Ham, London, while Diane Mwamikazi at Bury College in Bury created a colourful and patterned miniature pavilion informed by the clothing of her Rwandan and Congolese family.

"All the winner's work was so creative, you could read a narrative in all their work," said Ilori.

"They all explored different materials and you could see how the briefs had shaped their works but how their ideas reflected them personally, which was so good to see – such individuality and originality, the winners' work was also joyful and spoke about their communities."

As part of the project, a teacher prize was awarded to teacher Beverleigh Claypool at Bury College for her commitment to the Craft Council's Make First programme, which encourages children to explore crafts.

According to the Crafts Council, craft education is in steep decline in UK schools. Make First aims to help young people to get involved with craft and allow "open-ended and instinctive making through material exploration and development".

Craft School is part of the Crafts Council’s Make! Craft! Live! Programme, which is a series of nationwide exhibitions, fairs, events and digital activities that "celebrates the value of craft to empower, enrich and connect our society".

Craft School: A Summer of Playful Making takes place in London from 9 July to 3 September. See Dezeen Events Guide for an up-to-date list of architecture and design events taking place around the world.