The store in the US capital is the first execution of a new retail concept created for Akris, a family-run fashion house founded in Switzerland in 1922.

Brothers Albert and Peter Kriemler, the grandchildren of founder Alice Kriemler-Schoch, collaborated with David Chipperfield Architects Milan (DCA Milan) on the concept that debuted in DC, and has since also been applied in Tokyo.

"DCA Milan's design intent for the project was to enhance the materiality and fine craftsmanship of Akris collections through a solid, three-dimensional architecture associated with a light display system, defining a space where carefully chosen materials take centre stage," said the design team.

Located downtown, a few blocks from the White House, the boutique is lined with white-painted maple panels arranged to look like fabric pleats.

These panels wrap three walls and also cover the ceiling, giving the impression of a room within a room.

Shelves, clothing rails and mirrors are suspended from thin cables connected to the ceiling or high up on the wall panels.

Influenced by the work of Italian artist Bruno Munari, the taut wires form subtle lines across the pleated panels. 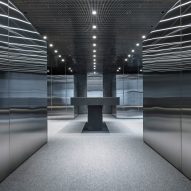 To partition the space, large sheets of stainless steel mesh hang from the ceiling. Anodized aluminium counters create a flow of movement around the store.

Ivory-coloured horsehair – a material long associated with Akris – is used on the fitting rooms walls and ceiling along with grey felt furniture, while wool carpet covers the floor.

Spotlights installed on ceiling tracks are directed at specific products and other lighting is hidden in the shelves.

Overall, the interior is designed to be subtle and restrained, to keep focus on the items for sale.

But the studio, which has offices in London, Berlin, Milan and Shanghai, also has past experience in luxury retail with projects including the New York headquarters for watch brand Rolex and a minimal Montreal boutique for fashion label Ssense.

The photography is by Alberto Parise.