British architect David Chipperfield has won a competition to rebuild the USA headquarters for luxury watch brand Rolex in New York, with a proposal for a stacked, jagged glass tower.

Revealed as the winner of the contest today, the high-rise will replace the Swiss watchmaker's existing home on the corner of 5th Avenue and 53rd Street, which it has occupied since the 1970s.

"We are proud to have been selected to design the Rolex USA headquarters building," said Chipperfield. "Our team is committed to creating an exemplary building befitting the heritage and culture of the Rolex brand, as well as its prominent 5th Avenue location."

The winning design is a 25-storey tower that comprises five cubes stacked on top of each other, gradually reducing in size towards the top. Renderings show that as the blocks step inwards, they create space for planted terraces on the outskirts.

The 165,000-square-foot (15,329-square-metre) building, which will host office areas for staff and tenants, is covered in zigzagged glazing. The glass is mostly translucent to offer blurred views inside, while other portions are transparent to form huge windows indoors. 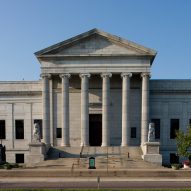 David Chipperfield to masterplan overhaul of Minneapolis Institute of Art

The glazing stops before the ground floor level, where a new Rolex store will be located.

The HQ is also designed to achieve a rating of LEED Platinum, which marks a high standard of environmental and sustainable design.

Chipperfield established his practice in 1985 and was awarded the RIBA Royal Gold Medal in 2011. His firm, which now has offices in London, Berlin, Milan and Singapore, has completed a number of projects in New York City – including the Bryant Park Hotel in 2001, which entailed the conversion of the 1924 American Radiator Building, and The Bryant residential tower.

His firm's other projects in North America, include the overhaul of the Minneapolis Museum of Art and a store for fashion company Ssense in Montreal.

Rolex also recently completed work on a new office tower in Dallas, Texas, designed by Japanese architect Kengo Kuma. Called The Rolex Building it features twisted floor levels that allow for a series of planted terraces to be created on every floor.