Dutch architecture studio Concrete has completed The West Residence Club condominium building in Manhattan, which features a brick base made with recovered debris and an upper portion made of glass boxes.

Encompassing 201,000 square feet (18,673 square metres), the apartment building stretches along 11th Avenue, between 47th and 48th Streets, in the Hell's Kitchen neighbourhood. The district features a mix of buildings, from brick townhomes and warehouses to new apartment towers.

The building holds 219 units, ranging from studios to one- and two-bedroom condominiums. Its design is meant to evoke the area's industrial heritage, said Amsterdam-based studio Concrete, which oversaw the project's architecture, interiors and landscape design.

The building rises 12 levels and offers views of the skyline and the Hudson River to the west.

The lower portion has a simple, boxy form, while the upper part consists of glazed boxes that the architecture studio said were designed to "pop in and out" and provide expanded views for residents.

"This results in a lightweight, transparent and almost cloud-like architecture that reflects the unique experience each of the apartments offers," Concrete said.

Designed to reference the area's warehouses, the building's seven-storey base has large, industrial-style windows and special bricks from Dutch company StoneCycling.

The custom-designed bricks are made of clay from the Netherlands that is combined with construction debris. Over 260,000 kilograms of debris was used to fabricate the brick.

The project required a total of 40 different shapes and sizes of brick.

"Each piece was individually hand-brushed with a subtly reflective, glass glaze before being fired in a centuries-old factory," the team said.

"The unique glass glaze creates a variety of shades and glossiness during the day, resulting in a different read of the building every time one sees it."

The entrance is marked by a plaza with seating, greenery and a birch tree, forming a gentle transition between the public street and private building.

Upon entering, visitors step into a double-height entry space with terrazzo flooring, brass-coloured curtains and comfy furniture. Daylight streams in through tall windows.

The upper-level units – on floors eight to 12 – are meant to feel lighter and airier. They feature pale oak flooring, sliding glass walls, extensive views and at least one private terrace. 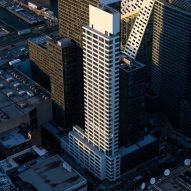 The building offers a range of amenity spaces, including a double-height gym, a kids' playroom and two hotel-style suites that can be rented for guests.

On the ground level, a greenhouse-inspired building is adorned with lounge furniture, bookshelves, a fireplace and a large work table.

Residents are also offered several opportunities to be outside without leaving the building.

On the eighth floor, there is a park with a playing turf, dog run and outdoor kitchen. On the 12th floor, one finds a swimming pool, barbecue stations and seating areas shaded by pergolas.

"Garden areas, ivy walls and trees that grow through openings in the pergola provide a green haven on the one hand, and views over one of the world's most iconic urban areas on the other," the team said.

The building's artwork includes an exterior, five-storey mural by artist Rubin415 and a subtle installation behind the concierge design that consists of bricks arranged in Morse Code characters to form the statement: "Hell is a mild climate, this place is Hell's Kitchen".

"This statement, made by a senior police officer to a rookie during heavy riots in the 1930s, is said to be the origin of the name Hell's Kitchen," the team said.

Other projects by Dutch studio Concrete include a 69-storey New Jersey apartment tower that is composed of irregularly stacked blocks and features unusual amenities such as a residency program for scientists and artists.

The photography is by Ewout Huibers.