Seattle architecture studio Olson Kundig Architects has collaborated with Greg Faulkner and his wife Lesa to create a home in a Californian forest that incorporates a steel-clad tower.

The 5,420-square-foot (504-square-metre) Analog House is in Truckee, California –  just over the state's border with Nevada – an area known for its forests, winter sports and lakes.

Olson Kundig Architects founder Tom Kundig worked with Faulkner – founder of Faulkner Architects – to create a home for the later that incorporates cement, steel and glass with minimal interruption of the surrounding ponderosa pine, manzanita and exposed basalt.

"Tom's an architect's architect," said Faulkner. "It is all about the work with no real exposed personal ego when you are in a meeting with him "It was really a team effort."

Kundig said that he was excited about the prospect of designing with and for the Berkeley-based architect on his own turf – Faulkner Architects has a second office in Truckee – referencing the pairs' preexisting friendship and mutual respect as a starting point for the collaboration.

"To be under the scrutiny of a terrific architect that's been delivering great work is no small task," said Kundig. "Greg and I are both old enough to be mature and confident in our voices and ability to collaborate as designers."

The result was a structure with many perpendicular volumes with the pour-in-place concrete that reference Faulkner's prior output mixed with a series of "kinetic devices that engage both the built environment and natural context".

Concrete walls extend away from the envelope and jut into the forest.

A series of hallways rooms and patios twists through the landscape, oriented around a central internal courtyard filled with foliage that includes three adult trees.

"Extensive transparency and clerestory windows throughout the home provide access to views and daylight, while numerous indoor/outdoor connections link occupants to their surroundings, an important consideration for this active family," said Olson Kundig Architects.

The entrance to the home proceeds from the driveway under an open-air passage.

Immediately one sees a staircase to the second level that is lined by a steel mesh to "invite daylight into interior spaces while providing visual and textural interest", according to the architecture studio.

At the entry are the kitchen, dining room and a small breakfast nook.

The staircase leads to an imposing steel-clad structure above the dining spaces with clerestory windows that also work with the stairwell to bring light into the living areas of the home.

The tower – referred to by Olson Kundig as a "treehouse" – holds sleeping areas for guests as well as a rooftop patio.

Back at ground level, a series of hallways form a loop around the interior courtyard, leading to the back of the home which houses the living room and master suite.

The hallways that connect the dining areas with the living room and master suite have floor-to-ceiling glass on either side, creating what Olson Kundig called a "forest hall" with views of the exterior as well as the interior courtyard.

A sweeping patio with a cantilevered overhang also connects these spaces. Near the kitchen on the wrap-around porch is an outdoor fireplace that, through a series of hand-operated cranks, can be converted into an Argentinian grill.

In the concrete-walled, double-height living area, a series of clerestory windows brighten the space while custom metal armature suspends the lighting and hides the electrical cords.

The clerestory windows found in the living area continue along the concrete-lined sections of the rest of the home. 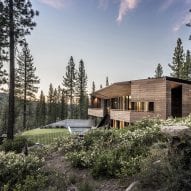 A small entryway near the living room leads to the master suites. Here, a custom Kundig-designed bed faces the forests through a glass wall, while the bathroom leads out to another courtyard that has privacy from the courtyard as well as the rest of the house.

The result is a highly fire-resistant home with a number of interfaces with the landscape and combines the unique stylistic hallmarks of the two studios.

"I am not sure this process would have worked with any other architect," said Faulkner.

"In the end, a friendship was forged and we are now engaged on a second project, a new K-12 school in Lake Tahoe."

Other projects by Olson Kundig include a floating water cabin in Seattle as well as a beach home in British Columbia that, like Analog House, respects the sensitive natural environment by using stilts to elevate the home.