Architecture firm Inrestudio has created an office and residential building for a mining company in Vietnam's Quang Binh province, featuring a conical concrete roof and openings on all sides.

Named The Kaleidoscope, the building provides workspace and accommodation for the employees working at an adjacent facility operated by Hoang Long Mineral.

The building is situated between a hill and the sea in a remote area that is exposed to hot winds during the dry season and typhoons and floods during the monsoon.

Inrestudio, which is based in Ho Chi Minh City, set out to create a pleasant environment for staff to live and work in during extreme weather while providing them with views in several directions as if looking through a kaleidoscope.

"The project aims at creating a protected space from the harsh tropical climate and enhancing the user's contact with nature through various architectural devices," Inrestudio explained.

The Kaleidoscope has a concrete structure topped with a large conical roof designed to resemble a nón lá – a type of Vietnamese hat that is traditionally worn by farmers.

The double-layered roof insulates the building from the sun, while its extended eaves shade the facades and prevent rain from reaching them. This allows windows to remain open even during heavy downpours.

Sections of perforated blockwork on the elevations allow breezes to naturally ventilate the building and produce constantly shifting patterns of light and shadow on internal surfaces.

Inrestudio designed The Kaleidoscope's floor plan as a series of triangular rooms that open towards the outside and narrow internally. They surround an open space on the ground floor and a cavernous central office above.

The seven triangular volumes contain private spaces including four en-suite bedrooms and a boardroom on the ground floor. The equivalent spaces on the upper level accommodate two further bedrooms and private offices. 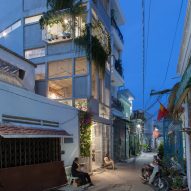 K59 Atelier merges its studio and home in concrete-framed block

Spaces in between the triangles include shared amenities such as a dining hall, auditorium and boardroom on the ground floor, as well as circulation and large balconies at either end of the building.

Careful attention was paid to the building's lighting to ensure it fulfils the requirements of workers during the day and night. As dusk falls, soft lighting ensures a more residential feel and limits light pollution affecting the natural surroundings.

Elsewhere in Vietnam, K59 Atelier also used concrete to create its own office that doubles as a  home for a family in Ho Chi Minh City.

In the Central Highlands, Khuôn Studio designed a house with concrete blocks on its facades that have a similar light-filtering effect to those used at The Kaleidoscope.

The photography is by Hiroyuki Oki.