A lacklustre office building in Southwark has undergone a vibrant makeover to become The Africa Centre, devised by architecture studio Freehaus and interior designer Tola Ojuolape.

The Africa Centre first opened in Covent Garden in 1964 as a "home-away-from-home" for the African diaspora in London, where people could meet, connect and enjoy cultural events together.

After closing its doors to the public in 2013, the institution now occupies a former office building on Southwark's Great Suffolk Street.

The revamp of the building was appointed to Shoreditch-based studio Freehaus, which worked alongside designer Tola Ojuolape to create an interior that reflects the African continent's rich array of cultures and traditions.

To establish the key ideas and themes that would underpin the centre's interior scheme, Freehaus and Ojuolape embarked on a thorough research process.

The studio and designer also visited other cultural buildings and members clubs around London to pick up inspiration.

"The key to the brief was for The Africa Centre's new headquarters to be unmistakably African," explained Jonathan Hagos, co-director of Freehaus.

"Given the breadth of diversity on the continent and among the diaspora, we were keen to avoid stereotypes and well-trodden aesthetic tropes." 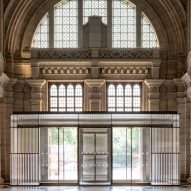 "At the same time, we wanted to avoid continent-sweeping generalisations – 'Africa isn't a country' is a familiar response, often born of frustration at the dismissive understanding of the breadth in peoples, cultures and traditions that span the African continent," he added.

"We wanted to turn this misnomer into a strength,” he continued, "and envisage what an embassy for a continent might look like in the 21st century; a space that demonstrates what connects us and binds us to one another, while celebrating the dynamism of the continent."

With the help of engineers Price & Myers, Freehaus opened up the ground floor of the building to make way for two new entrances.

One of the doorways opens onto the buzzy Great Suffolk Street, while the other connects the rear of the building to a couple of converted railway arches that The Africa Centre already used for events.

Upstairs on the first floor is a bar and lounge that features patterned armchairs and a large, curved drinks counter clad with relief tiles. The following second floor contains an event space and a gallery.

There are a further two floors in the building that, once funding is obtained, will be transformed into a learning facility and incubator for budding Afro-centric businesses.

The extra funding will also go towards adding an ornamental screen to the centre's black-painted facade, which will echo the ornate mashrabiya screens seen in north African architecture.