Turner Prize-nominated art duo Cooking Sections and Palestinian research collective Sakiya have created an exhibition in Edinburgh called In the Eddy of the Stream, which reevaluates the significance of plants and other organisms in our ecosystems.

The multimedia show is on display at the Inverleith House of the Royal Botanic Garden Edinburgh as part of the science centre's three-year Climate House exhibition programme.

Spread across six galleries, the exhibition presents a range of work from research-heavy installations to live performances, developed by Sakiya and UK-based Cooking Sections.

The show aims to "draw attention to the breakdown of ecosystems through the removal of plants and the ensuing long-term harm to people, communities and other species," according to Cooking Sections.

In particular, In the Eddy of the Stream intends to highlight how certain plants and non-sentient animals like oysters have been threatened by the complex histories of land ownership in Scotland and Palestine.

"The installations, performances and materials in this exhibition challenge how botany has been used as a mechanism of control and how it might identify new horizons," Cooking Sections said.

"We want visitors to look again at the impact of our relationship with nature and non-human species and imagine new ways, in which to develop that vital relationship to the benefit of all parties."

One installation, named Recalling Recollection, showcases 33 botanical specimens of edible and medicinal plants, which the British Empire classified as a threat to its wheat monocultures during the country's occuption of Palestine in the wake of the first world war.

Sakiya has presented the specimens alongside postcards from Palestine in both Arabic and English that share stories, anecdotes and relevant folklore attempting to reclassify the plants as vital organisms.

"In the same gallery, an oak baseboard depicting the 33 plants lines the space in reflection and opposition to the room's ornate cornicing," Cooking Sections founders Daniel Fernández Pascual and Alon Schwabe told Dezeen.

Another piece, From the Shores that Found their Sea, features a collection of wall mosaics formed from terrazzo-style tiles that are made out of waste mussel and oyster shells rather than traditional carbon-intensive cement.

The shells were sourced from restaurants on the Scottish islands of Skye and Raasay that have adopted Cooking Sections' Climavore menu – a regenerative approach to food sourcing developed by the art duo, which is also used by eateries at the Tate and V&A museums in London. 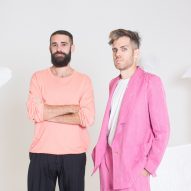 A room with electric blue walls houses Cooking Sections' Intertidal Polyculture project, a group of nets and ropes crafted from heather, kelp and purple moor grass instead of sterile plastics.

When placed underwater, these natural nets and ropes encourage intertidal species to attach to them and grow.

"All of this builds up towards a new framework for collective usership of the coast, a working process to advocate for the establishment of the tidal commons in Scotland," explained Fernández Pascual and Schwabe.

Oyster Readings is both an experimental installation and a playful performance piece that must be booked in advance.

Here, visitors are invited to sit on organically shaped stools arranged around a matching table, both formed from a material made from crushed oyster shells in place of concrete.

Enveloped by a green fringe curtain, this space hosts palmistry-style readings where experts reveal information about the state of Scotland's seas by analysing the patterns of local oyster shells, in a practice similar to studying tree rings.

"Oyster Readings foresee the future of the coast through the ridged surface of an oyster shell, allowing you to read into our common oyster futures," said Fernández Pascual and Schwabe.

In the Eddy of the Stream gets its name from the concept of an eddy, which describes "a sheltered area where water flows back upstream against the current" and, according to Fernández Pascual and Schwabe, embodies the work they created with Sakiya.

Similar projects by Cooking Sections, which is known for its focus on climate change, include an installation in Sharjah highlighting desert plants as an alternative to water-hungry greenery in arid cities.

In the Eddy of the Stream is on show at Royal Botanic Garden Edinburgh as part of the Edinburgh Art Festival from 2 July to 18 September 2022. See Dezeen Events Guide for an up-to-date list of architecture and design events taking place around the world.

The photography is by Shannon Tofts.