Architect Stacey Farrell has completed a seaside holiday house in Omaui, New Zealand, which nestles into the landscape for protection from the harsh coastal weather.

Queenstown-based Farrell designed the metal-clad Coast House for a north-facing site that slopes down towards the dunes of Omaui Beach.

Windswept beech trees on the site informed the low and grounded design of the home, which is oriented to provide views of the ocean and mountains.

It has a cranked floor plan, with two linked volumes that wrap around one of the trees. These volumes are treated with contrasting black and brown external finishes.

"The two forms collide, with the black form dominating the brown," explained Farrell.

"[This is] inspired by the ocean waves journeying from the distant mountains across the bay and crashing into the shore."

The first volume containing the entrance is clad with dark-brown corrugated metal and slopes up gradually to meet the roof line of the black-metal section housing the main living areas.

"Materials and colours are deliberately pared-back so as not to compete with the natural environment," said Farrell, adding that native plants will eventually grow to cover parts of the dwelling.

A paved path leads between a bin store and a wood shed to the building's entrance. The front door opens into a boot room with built-in cupboards lining one side.

One of the home's two bedrooms is accommodated next to the entrance hall, located in the smaller of the two volumes. The other bedroom is situated at the far end of the dwelling to maximise privacy.

A central living space is positioned to make the most of the available sunlight and views, with large windows extending along one side of the room.

Coast House was constructed using structural insulated panels (SIPs), which Farrell left exposed internally rather than lining them with another material such as plasterboard.

According to the architect, its structure can be dismantled and moved in the future if rising sea levels threaten to flood the site.

Inside, the panels' wooden surfaces are stained to emphasise their warm tone and texture, adding "a richness and a lodge-like feel to the internal spaces". 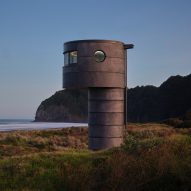 A highlight of the interior is a large table in the kitchen, which is used for everything from meals to games of table tennis.

The Coast House was constructed to Passivhaus standards, meaning it is well insulated and requires minimal energy to achieve a comfortable temperature year-round. A wood-burning stove provides heating, while rainwater is collected from the roof for use in the house.

Elsewhere in New Zealand, Crosson Architects recently completed the circular Te Pae lifeguard tower that is designed to blend in with its setting on a remote black-sand beach.

Intuitive Architects created a timber-clad holiday home that frames dramatic views of its mountainous setting in Central Otago, while Herbst Architects raised a house in Piha on steel stilts to look out through dense woodland to the beach.

The photography is by Ben Ruffell.