The impact of climate change on the UK city of Liverpool is visualised in these three towering sculptures by Polish artist Alicja Biała, whose work gives physical form to environmental data.

Set up on the city's waterfront, the three towers are the latest in Biała's Totemy series, which began with an installation beneath MVRDV's Bałtyk tower in Poznań, Poland.

The brightly coloured, building block-style sculptures always represent data on the different causes and effects of climate change, tailored to the place in which they are shown.

In Merseyside Totemy, the focus is on rising sea levels. The data used in the work shows what the local area could look like in the year 2080 if ice caps continue to melt and sea levels continue to rise at current speeds.

Each of the three steel totems is dedicated to an area of Merseyside — Liverpool City Centre, Formby and Birkenhead — with their rusted bottom sections showing the percentage of land relative to the full height of the sculpture that will be inside the flood zone in less than 60 years.

For the green-topped, largely rusted Formby totem, that portion is 82 per cent.

The vibrantly painted upper portions of the totems represent the amount of land that would remain above the flood zone, while the mast-like flagpoles on top point in the direction of the areas they represent.

"As the sea levels rise, these totems would emerge from the water surface as strange buoys, signalling and reminding passersby of a time in which the choice of how to navigate climate change was still within reach," said Biała.

The patterns on the sculptures are similar to those used on local buoys, while those on the flags are based on the international maritime signals used by ships to communicate with each other, particularly those signifying danger and distress. 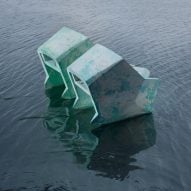 The artist aims for her work to make climate change data, which can usually seem academic and theoretical, more tangible and relatable. But over time, she says she has learned to focus on more simple datasets while evolving her formal and material explorations.

"I used to be terribly affected by the data and information I was showing, and thus I wanted the statistics to shock viewers, to trigger a counter-reaction," Biała told Dezeen.

"Now, I realise the value and effect of sparking conversations and how this can often lead to longer-lasting results, educating younger generations and creating sustained interest."

Visitors to Merseyside Totemy can scan QR codes at the base of the sculptures to access full information on the presented data, which the artist collected along with Liverpool John Moores University researchers Jason Kirby and Timothy Lane.

There is also an educational stream to the project that has seen Biała run solutions-based workshops with secondary school pupils.

The work also contains other references to Liverpool's maritime history: the sculptures are made from traditional shipbuilding materials including steel, while their stone-filled wire-mesh plinths are based on the gabion baskets used as sea defences.

Merseyside Totemy was commissioned by the Liverpool Biennial along with the non-profit Liverpool BID Company, and the sculptures were produced locally at the Castle Fine Arts Foundry Liverpool.

After their two-year stint at Liverpool's Princes Dock, the totems will have an afterlife elsewhere but those plans are yet to be announced.

Another project aimed at visualising climate change data has come from Dutch design studio Raw Color, which turned statistics into blankets, scarves and socks for its Temperature Textiles collection.

The photography is by Rob Battersby.