Digital artist Maxim Zhestkov discusses his Waves immersive digital art installation, which is animated in response to a series of algorithms informed by the laws of physics, in this exclusive video produced by Dezeen in collaboration with W1 Curates.

Zhestkov's first solo exhibition at the W1 Curates gallery in London features a computer simulation made up of millions of spherical particles that move and collide with each other, creating digital "motion sculptures".

The artwork is displayed on screens that wrap around the walls of the gallery and is reflected by mirrored columns and glossy black floors, furthering the immersive effect of the artwork. It is also displayed on the building's facade, which is clad in three floors of screens.

Named Waves, the piece was brought to life using a series of algorithms informed by the principles of physics, which Zhestkov explained can bring about unpredictable results.

"I love this process because of unpredictability," Zhestkov said in the exclusive video interview, which was filmed by Dezeen in at the gallery. "You create some rules and some limitations and then this process is ready to be simulated."

The artwork depicts a mass of colourful particles that appears to move in waves. The movements of each particle have a knock-on effect on the others, disrupting and shifting the form of the piece.

"We used elements which are interconnected with energy waves and motion," he explained. "They change its structure and make wonderful patterns."

The waves used in Zhestkov's simulation are a conceptual representation of waves of energy found in both digital and physical environments that create shifts and subtle changes in the world around us.

The artist explained that even the smallest change in the simulation can bring about a butterfly effect in how the rest of the system will react.

"Even the smallest action in one side could bring something unpredictable on the other side, and when everything is colliding together you can see how beautiful this language could be," said Zhestkov. 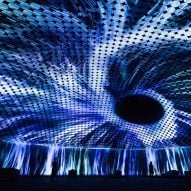 The unpredictability of working with simulations and algorithms is a process that the artist compares to creating theatre.

"You find wonderful actors, set the lights and create everything around this play and then say action," Zhestkov said in the video.

Zhestkov's work aims to merge architecture, sculpture, colour, movement and sound to explore the relationship between digital and physical environments. While Waves is the artist's first solo exhibition, his work has previously been exhibited at an exhibition of NFT art at the 2022 Venice Biennale and at ArtBasel Miami.

W1 Curates is an art gallery located on London's Oxford Street whose mission statement is to "bridge the gap between digital art and the traditional art world". The gallery has previously exhibited the work of David Bailey, David Lachapelle and many others.

Waves by Maxim Zhestkov will be on show at W1 Curates until September 8 2022. See Dezeen Events Guide for an up-to-date list of architecture and design events taking place around the world. 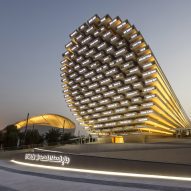 This video was produced by Dezeen for W1 Curates as part of a partnership. Find out more about Dezeen's partnership content here.