Australian studio Hassell has concealed an exhibition space for the Jodrell Bank Observatory in Cheshire, England, beneath a grass-topped dome informed by the site's iconic Lovell Telescope.

The First Light Pavilion sits within the observatory's arboretum, which was designed by its first director Bernard Lovell and was awarded UNESCO World Heritage Site status in 2021.

Jodrell Bank Observatory approached Hassel to transform its visitor experience into a "journey of discovery", with an exhibition space that celebrates the site's heritage and traces the history of radio astronomy and astrophysics.

Looking to respect the protected site, the studio hid the entire structure beneath a grass-covered concrete dome. With a diameter of 76.2 metres, it matches the dish of the site's Lovell Telescope – the UK's largest radio telescope.

"Designed to protect and enhance views across the site, the pavilion sits seamlessly within the natural setting or the arboretum, where visitors can roam freely with an elevated viewpoint across the parkland," said Hassel.

"In addition to taking inspiration from the site itself, [the pavilion] was influenced by a range of sculptures, structures and natural landforms from around the world, ranging from ancient monuments such as Newgrange in Ireland to the renowned circular Fuji Kindergarten in Tokyo," it added.

At the centre of the First Light Pavilion is a large concrete drum containing a 150-seat auditorium and the exhibition space.

This is surrounded by a ring of spaces including a cafe, kitchen, classroom, offices and toilets.

Two sweeping arc-shaped concrete walls puncture the dome's southern edge to mark the visitor entrance. A slim cut-out in their surface cast a single line of light across the foyer.

Similar openings form a service yard to the west and a circular terrace providing external cafe seating to the east. This seating area is aligned with the position in the sky in which the Lovell Telescope first detected the Russian satellite Sputnik in 1957.

For the interior displays, Hassell worked with exhibition designer Casson Mann. The team repurposed sections of one of the telescope's old radar dishes as curved panels for projections.

In other spaces, the form of the First Light Pavilion is used to create immersive displays, such as in the auditorium "pod" where a screen follows the curve of the wall, and in the multimedia room where the domed ceiling can be used for night-sky projections. 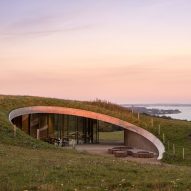 "Visitors will circulate clockwise through a series of interactive displays which will tell the story of the site, the history of radio astronomy and modern astrophysics, the dawn of the Space Age and the creation of the Lovell Telescope," said the studio.

"As visitors leave the pavilion, a historical avenue of trees frames the giant Lovell Telescope in the distance, inviting them to explore further across the site."

Founded in Adelaide, Australia, Hassell is an international architecture studio with offices in the UK, US and Asia. Another recent project by the firm includes the renovation of a former wool warehouse in Sydney Harbour to create spaces for the Sydney Theatre Company.

Disguising buildings as part of a landscape is a popular trend in architecture, as it can allow architects to minimise the visual impact of their designs. Elsewhere, Danish architecture studio CEBRA raised the ground up to hide a visitor centre at a historic hill in Denmark.