North River Architecture designed Gallatin Passive House as an extension to an 18th-century farm in upstate New York, repurposing the existing barn as a double-height play space for the owner's three children.

The project, which was completed in 2021, sits on a former farm that occupies a 163-acre lot in Gallatin, within New York State's Hudson Valley. The area is known for its many orchards and vineyards and is a popular getaway from New York City.

The Gallatin Passive House was designed and built by North River Architecture, a firm based in the nearby town of Stone Ridge.

The studio specialises in Passive House (PHIUS)-certified designs, a distinction that is awarded to buildings that meet certain sustainability criteria.

Deep overhangs on each of the long sides of the rectangular volume that makes up the home provide a buffer between the interior and exterior spaces.

North River Architecture included a home office on the ground floor, while the rest of this level is mainly comprised of an open-concept kitchen, living and dining room.

This space has built-in cabinets that maximise storage and opens out towards a partially enclosed courtyard between the house and the nearby barn.

"Original detailing in the house produced by North River’s own artisans as well as local subcontractors include extensive customized storage and millwork in all rooms," said North River Architecture.

Upstairs, there are three children's bedrooms, in addition to the primary suite that contains another small office space. North River Architecture also included a playroom upstairs that doubles as a guest bedroom when needed.

"It does this externally with extensive covered pea stone terraces, and internally through a schoolroom/playroom and steel staircase," the firm explained.

The playroom forms a sky bridge to the barn, connecting the old and new constructions and creating a covered exterior space on the ground floor.

The barn's rough finishes offer a contrast to the rest of the home. Its wooden structure and cladding were left exposed, which contrasts the new steel staircase installed as part of the renovation. 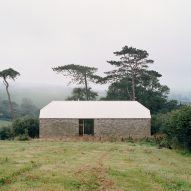 The compound includes a pool and pool house with a sauna a few steps away from the home, as well as a semi-detached garage for the main house.

"Beyond the barn, the clients also teamed with regional permaculture designer Appleseed Permaculture on the gardens and orchards that surround the house, which is sited at the core of the original historic farm," said North River Architecture.

Other homes in upstate New York include a double-height retreat that architect Maria Milans del Bosch designed for herself and an off-grid cabin by Marc Thorpe with an all-black exterior that recedes into the forest.