Wood takes centre stage in this riverside dwelling in Oregon by American office Landry Smith Architect, complete with black cedar siding and an interior made from white oak boards.

The Divine House is a bungalow located outside of the city of Eugene, sitting around 50 feet (15 metres) above water-level and overlooking a bend in the McKenzie River.

Named after its owner, the property belongs to Roscoe Divine, a retired American track and field athlete.

The new-build house has a rectangular footprint and is topped with a deep-hanging gable roof made of raw corrugated aluminium, which will oxidise and dull over time.

The Divine House is situated on the upper end of its plot overlooking the river to remain as far away from the floodplain as possible.

It replaces an old, rotting house believed to have been built by someone from the local timber industry "many, many years ago".

"It was a cosy but dilapidated little structure with an open carport that looked out onto the river,"  founder and architect Landry Smith told Dezeen. "This was an idea that carried on."

A concealed clip system is installed over a grid of wooden battens and counter-battens, attaching the roof to the house's volume and creating vaulted ceilings inside.

"The roof with its deep overhangs protects the house from Oregon's regular rain and sun, but it is also the dominant exterior feature," Smith said.

"Everything else, so to speak, happens under the roof, in the shadows, and gives the house an understated, under-the-radar quality." 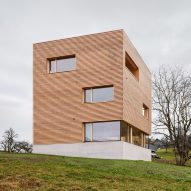 The generous depth of the roof's overhangs is informed by the maximum length of local Douglas fir tree structural members. This length also determined the width of the property's rooms.

Timber plays a key role in The Divine House. Its cladding is made up of vertical-grain cedar boards, stained with black pine tar.

Cedar is a readily-available local material that is commonly used in Oregon architecture for its durability and climate-suitability.

Beneath this exterior cladding, the house is formed from cedar battens and cedar counter-battens, like those attached to the roof.

"Wood is used for almost all houses, and now many larger buildings, in Oregon, and is a material that many local craftspeople have a mastery of," explained Smith.

Inside, both floors and walls are built from wide, plain-sawn white oak boards that are finished with a hard-wax oil chosen to preserve the raw appearance of the wood.

"The white oak can take an incredible amount of abuse and still look elegant, as the floors of The Tate Modern museum in London can attest to," said Smith.

Two halves of the property each house various spaces, from laundry and storage areas to the main living room which opens out onto a large hardwood deck, connecting the house with nature outside.

Sight-lines exist at various intervals throughout the property, striking a balance between integrating views into the house but also maintaining a sense of privacy.

Landry Smith Architect is a Portland-based architecture office, founded and led by Landry Smith since 2014.

Other recent wooden houses include a prefabricated cabin in a Netherlands' forest by Amsterdam studio Woonpioneers, and another holiday cabin with a mono-pitched roof built by Out of the Valley for a farm in Devon, England.