American studio Hybrid has designed, funded and built a pair of "missing middle" townhomes that are meant to help densify a Seattle neighbourhood while respecting the context.

The Oak & Alder project is located in the city's Central District neighbourhood, which is dotted with Craftsman-style homes. Local studio Hybrid served as the architect, developer and builder.

The duplex was built on a slender, rectangular corner lot that had formerly been a side yard for the adjacent single-family home.

Hybrid helped the owner divide their property and create a new development parcel; the firm then bought the slice of land.

Hybrid aimed to create a multi-family residence that would help densify the neighbourhood – an important concern in the area.

"75 per cent of Seattle's land is dedicated to single-family zoning, which is extremely uncommon for a city this size," says Alex Herbig, a project designer and development manager at Hybrid.

"Oak & Alder is the missing middle typology that oﬀers unit density, but at a scale and materiality that play well with respect to the adjacent single-family homes."

The architects conceived two perpendicular townhomes with gabled roofs that are joined at the centre. Three parking spots are found in the rear of the building.

Exterior walls are clad in stained cedar and Corten steel – a material choice that takes cues from a nearby red-brick high school.

Within the units, the layouts are similar but not identical.

The front unit – which totals 1,596 square feet (148 square metres) – is entered on the west, where large windows bring in ample daylight and offer views of the skyline.

The rear unit, which encompasses 1,292 square feet (120 square metres), is entered on the north, where it faces a large English oak.

In both units, the entry level, which is lifted above grade, contains a main bedroom and two bathrooms – a departure from the typical approach of putting public areas on the main level.

Instead, public areas are on the upper level, where one finds an open-concept kitchen, dining space and living room. Just above is a loft that can be used for different functions, such as a studio or office.

The units diverge in terms of programming on the lowest level. The front unit has a flexible room, a kitchenette, a bathroom and storage space, while the rear unit has two kids' bedrooms and a bathroom. 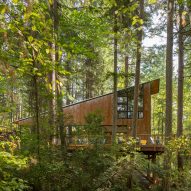 The front townhome was purchased by a man who works in nearby Capitol Hill and shares his home with a longtime friend, who lives in the basement level.

Their loft space is used as a music studio, and their unit has access to an elevated terrace in the centre of the building.

The rear townhome is now occupied by a family who recently moved from Copenhagen to Seattle to launch a video game company.

The family purchased the home sight unseen during the pre-sale process and were able to customize certain elements, such as the cabinetry and locating the kids' rooms on the basement level.

Based in Seattle, Hybrid was founded in 2003 by professionals with expertise in architecture, landscape design, art, planning and history. Other projects by the company include a compact house in an alleyway that is partly lifted off the ground to make way for parking.