Officially opened by the Queen of Denmark last weekend, the temporary 50 Queens installation aims to draw attention to the country's "fearless women".

"Our exhibition celebrates the untold stories of women who have made significant contributions to Danish history but haven't yet been properly recognized," said BIG partner Giulia Frittoli.

"As more focus is brought to issues of social justice and equality, we are so proud and honored to contribute to the conversation and give a voice to those who haven't been heard."

It consists of 49 white pedestals of different heights that each represent a historic woman, alongside a single pillar that was left unnamed so that people can suggest additional women to include.

Each of the pedestals contains a metal plaque with the name of a female pioneer along with a QR code that directs people to a page with more information about their life and work.

The installation was curated in collaboration with the Kunsthal Charlottenborg museum to mark 50 years of Queen Margrethe II's reign, and the 49 women that it represents were selected by a jury led by former politician Ritt Bjerregaard. 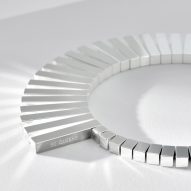 BIG hopes that the exhibition, which will be in place until 18 September, will stand in contrast to the majority of male statues that are positioned around the city.

"With 50 Queens, I hope we can raise awareness about the importance of gender equality and social diversity in our cities and public spaces to inform how we can improve our urban communities of today and plan for more equal cities of tomorrow," added Frittoli.

To coincide with the installation, BIG collaborated with jewellery company Georg Jensen to create a necklace that was gifted to the queen. Designed as a "miniature representation" of the 50 Queens installation, the necklace was made from 50 sterling silver blocks.

Founded by Danish architect Bjarke Ingels, BIG is one of the world's best-known architecture studios. It recently completed a cantilevering housing block in Amsterdam and is designing a "flood-proof" floating city called Oceanix Busan.

The photography is by Laurent De Carniere, unless stated.