British architect Norman Foster, who was appointed to the Order of Merit by Queen Elizabeth II, has paid tribute to the monarch after she passed away yesterday at the age of 96.

"I had the privilege to know Her Majesty Queen Elizabeth II for the last five decades of her remarkable 70-year reign as our Monarch," Foster said in his statement.

"During that time, myself and colleagues were honoured to welcome he

r on many occasions when she celebrated projects for which we had been commissioned."

During her reign, which is the longest in British history, the Queen opened a host of major buildings in the UK and the Commonwealth, including London's Stansted Airport in 1991 and the Great Court at the British Museum in 2000, both projects by Foster's studio Foster + Partners.

In 1997, the Queen appointed Foster, whose full title is Lord Foster of Thames Bank OM, to the Order of Merit, a mark of distinction that only the monarch can bestow and is currently held by just 18 recipients, including Foster, James Dyson, David Hockney and Tim Berners-Lee. Foster called the distinction his "greatest honour".

"On a more personal level, my greatest honour was, in 1997, to be appointed to the Order of Merit – an award which is in the sole gift of the Sovereign," he said. 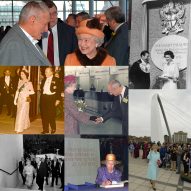 "These various privileges granted me an insight to a lady whose leadership, loyalty and regal humility were faultless, throughout her life and her reign, and endured to the end. With today's sad news, myself, my family and my colleagues share in the grief that is felt across the nation, the Commonwealth and the wider world."

The Royal Institute of British Architects (RIBA) also paid tribute to the Queen, who personally approved its Royal Gold Medal for Architecture each year.

"I sincerely thank Her Majesty for her unwavering support and patronage of our institute during her 70-year reign," said RIBA president Simon Allford in a statement.

"Architecture has undergone huge evolution during the Queen's seven decades on the throne. At the time of her coronation, following the devastation of WW2, architecture was all about welfare state-sponsored modernism as we entered a brave new world. Today, we're prioritising innovative, low-carbon design that can meet the challenges of an uncertain future."

"Throughout these turbulent years, Her Majesty's steady influence and calm assured presence has been a vital constant for our profession throughout the Commonwealth and beyond."

Other architecture organisations and studios have also paid respect to the late monarch.

The Royal Incorporation of Architects in Scotland (RIAS) said it was "saddened at the news of the death of Her Majesty the Queen" in a statement on Twitter.

Also paying its respects was architecture studio RMJM, which said it was "deeply saddened by the passing of Her Majesty the Queen." The studio designed the Commonwealth Institute building, which was opened by the Queen in 1962.

The photograph shows Norman Foster meeting the Queen at the opening of Stansted Airport.