The TômTex looks at Peter Do's Spring Summer 2023 show both comprised glossy wide-leg trousers and rounded-neck tank tops, with one look featuring camel hues and the other a black finish.

The garments were constructed from TômTex's "novel non-woven biofabric", a 100 per cent biodegradable material derived from shrimp and mushroom food waste that has the look and feel of leather.

The tank tops were embossed with a subtle cross-hatched pattern that is reminiscent of polythene-coated duct tape, while the trousers were kept smooth but given stitched, panelled detailing.

TômTex's material alternative is made from chitosan, a derivative of the biopolymer – a type of polymer produced by natural sources – chitin. The company works with Vietnam-based suppliers to gather seashell and mushroom waste from which to extract the chitosan biopolymer.

The collaboration arose from TômTex's founder Uyen Tran and Do's existing relationship after Tran worked for Do at the start of the fashion brand's inception.

Since Tran first developed the biobased material and founded TômTex in 2020, the brand has made vast improvements to the material's properties and composition to better its strength and aesthetics, the designer said.

"We have made significant strides in the last year improving the mechanical behavior, aesthetic properties, and salability of the material," Tran told Dezeen. 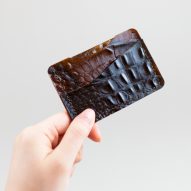 "For instance, by subtly tweaking our material formulation, we have been able to more than triple its absolute breaking strength, all without adding any plastics – in fact, nothing derived from a fossil source whatsoever: 100 per cent bio-based," she said.

"Similarly, we've changed our process and formula to improve the hand feel of the material, adding softness and silkiness, and can even make suede-like textures."

The search for green materials has become increasingly urgent, as an estimated 92 million tonnes of textiles end up in landfills each year and laundry alone is responsible for half a million tonnes of plastic microfibers being released into the oceans annually.

"It's becoming increasingly clear that the climate crisis extends beyond greenhouse gas emissions and climate change into material life cycles: the prevalence of microplastics, for instance, looms large," said Tran.

"Making sure our materials can gracefully return to the Earth's biogeochemical cycles must be a key part of changing our relationship with the planet's other inhabitants and the planet itself, if we are to responsibly address our place on it."

TômTex explained that the brand is working to expand and scale its production to allow for further collaborations with fashion brands such as Peter Do.

"We've been working to build our scale, moving from our lab to pre-pilot scales in our facility in Brooklyn Navy yard. Right now, we are working to expand our reach through unique and trailblazing collaboration with designers like Peter Do," said Tran.

"We plan to build robust partnerships with designers that prize sustainability, equity, and craftsmanship in their products. We’re planning to expand our factory to Vietnam by early 2024 to produce at mass scale so we can deliver more regenerative materials to the fashion market."

In 2021, French luxury house Hermès partnered with biomaterials company MycoWorks to reinterpret its Victoria shopper bag in a leather alternative that is grown from mycelium.

Berlin design students Lobke Beckfeld and Johanna Hehemeyer-Cürten developed a fruit-leather bag that dissolves in water and can be used to fertilise plants once it is no longer needed.

Photography is by Monica Feudi unless stated otherwise.