The Guinness World Record-breaking inflatable sculpture was the centrepiece of Diesel's Spring Summer 2023 show, which took place on 21 September at the Allianz Cloud Arena.

Standing on top of Diesel branded flooring at the centre of the 5,000-seat arena, the sculpture was 50 metres long, 38-metres wide and 14-metres tall.

"During our inspiring creative process with Glenn the concept appeared to break the Guinness World Record, we then got obsessed by this idea and eventually broke it," studio founder Dennis Vanderbroek and Luc de Kock told Dezeen.

"We obviously started from the conceptual point of view that, due to the scale of the project, became bigger and bigger both physically but also conceptually," said Vanderbroek and De Kock.

"Once the idea got planted into all of our heads we simply could not let it go and when the conversation with the Guinness World Record got installed it seemed that we had a fair chance to do it."

The centrepiece depicted a collection of four silver-hued, attributeless and genderless bodies merging and falling into each other with limbs entangled and protruding into the ceiling and crowds of the arena.

Studio Dennis Vanderbroeck collaborated with inflatable manufacturer Bigger Than Life to produce and construct the sculpture, which was made using a nylon similar to those used in the construction of parachutes. 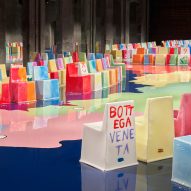 Vanderbroeck told Dezeen that the studio looked to ancient sculptures, extreme sports, contortionists and dancing when creating the sculpture. It used 3D modelling to create humanly impossible poses to produce a design that conveyed bodies trying to break from their environment.

"The inspiration for the spatial design started with researching postures of Ancient sculptures. We gradually created a narrative that explored the limitations of the physical human body," said Vanderbroek and De Kock.

"The sculpture takes over the existing architecture and therefore makes the audience both overwhelmed by it but also a part of it by making it feel almost intimate becoming a part of the sculpture's embrace."

The show featured a 4,800-person audience with 3,000 members of the public who had registered for free tickets  and 1,600 Milanese fashion students.

At Milan Fashion Week, Bottega Veneta showed its Spring Summer 2023 collection that featured a resin-poured set and 400 chairs that were designed by Italian architect Gaetano Pesce.

In London, JW Anderson presented its most recent collection in a Soho arcade, which featured clothing made from computer keys.

The photography is courtesy of Diesel and Studio Dennis Vanderbroeck.