London-based designer Samuel Wilkinson has created a prototype of a tree-like structure called Ecacia that harvests solar energy while providing a public place to shelter during very hot weather.

Wilkinson's studio based the design for Ecacia on a species of acacia tree that grows on the savannahs of eastern and southern Africa and is characterised by its large, umbrella canopy that allows it to capture large amounts of sunlight.

"During initial research we looked into inspiration from any natural vegetation that creates shade and shelter so found the wonderful acacias trees in the African savannah with their wide, flat canopies," Wilkinson told Dezeen.

"The trees, usually growing alone or in small clusters, have very little lower vegetation so work perfectly as respite for farmers and animals from the sun."

Prototypes of Ecacia were recently completed in collaboration with US start-up Solar Forma, a specialist fabricator that seeks to create solar products for public urban spaces which serve additional purposes rather than simply taking up space for power generation.

"The project is based around the overarching idea of combining solar capture and placemaking in urban spaces," Wilkinson said. "There is no reason why solar products can't add a lot more value to a particular space more than just the captured energy."

Solar panels comprised of 708 monocrystalline silicon solar cells were embedded into the facetted nonagonal roof of the Ecacia.

The energy generated by this solar canopy can be used to power nearby public amenities or kiosks, or to charge electric vehicles (EVs) and bikes when fitted with accompanying electricity storage. Alternatively, the Ecacia can be plugged into the grid.

At seven metres wide, the timber-lined roof provides a large shaded area under which people can congregate.

It also contains four programmable LED lamps concealed within the supporting "branches" that shine upwards into the wooden canopy, allowing Ecacia to illuminate the surrounding area with a soft glow at night.

The "trunk" is made from a steel frame with aluminium cladding and can be either 6.7 metres tall or 5.2 metres tall, taking a single day to install and able to withstand winds of up to 160 kilometres per hour. 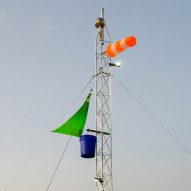 Among Solar Forma's other products under development designed by Wilkinson's studio is a modular carport called Wave, defined by an undulating solar roof designed to resemble a body of water and fitted with EV chargers.

Design that seeks to imitate nature to respond to human challenges like Ecacia is known as biomimicry.

Other examples of biomimicry previously featured on Dezeen include algae-inlaid tiles created by the Bartlett School of Architecture's Bio-Integrated Design Lab that can filter toxins out of water and a biodegradable vessel based on termite mounds that can prevent fertile land from succumbing to desertification by Parsons School of Design graduate Zihao Fang.

The images and photography are courtesy of Samuel Wilkinson.