Architecture studio BIG has completed six curved housing blocks that combine to form a spiral shape at the Sneglehusene development near Aarhus, Denmark.

Containing 93 homes, the Sneglehusene housing for developer Taekker Group forms part of the Nye neighbourhood to the north of Aarhus and was created using a modular system developed by BIG and contractor CJ Group.

The six curved blocks, which vary from one to four stories, spiral out from a central park designed by BIG Landscape surrounding a small pond.

The overall design for Sneglehusene, which translates as the snail houses in reference to the developments' spiral form, was based on the Dortheavej Residence housing that BIG and CJ Group previously created in Copenhagen.

"As an architect, one typically only gets to build a house once," said BIG partner Finn Noerkjaer. "With the Sneglehusene, we were given the opportunity to evolve our housing concept from an earlier project, while also developing the buildings' own identity."

"Our modular concept has made it possible for us to maintain simplicity in the execution despite the construction's complexity, and we have been allowed to improve the concept with all our experience," he continued.

The development has a similar aesthetic to the Copenhagen housing, with the blocks broken up to create a "porous wall". 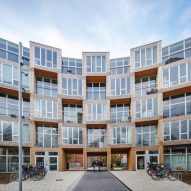 A series of balconies were placed within the indented spaces, while the blocks step down at the ends to create larger outdoor terraces.

The building's concrete structure was clad with timber boards on its facades to express the modular pattern, while it was exposed in the apartment's ceilings.

All of the homes are dual-aspect with windows facing inward and outward, while the studio aimed to open up interior spaces with minimal internal walls.

Founded by Danish architect Bjarke Ingels in 2005, BIG is one of the world's best-known architecture studios. It has recently completed a cantilevering housing block over IJ lake in Amsterdam and is developing BIG and Samoo unveil design for a "flood-proof" floating city Oceanix Busan.

Ingels is also the co-founder of a housing startup named Nabr that intends to revolutionise the sector. "Architects or designers are, in a way, the last ones to get involved [in housing] so it becomes very hard to be part of a more fundamental transformation of the industry," Ingels told Dezeen in an exclusive interview.

"This is basically an attempt to apply design, not just to the final product, but to the entire process that delivers our homes."

The photography is by Rasmus Hjortshoj.