For its closing look, Hadid entered the Salle des Textiles wearing nothing but flesh-coloured underwear. Hadid approached a lit platform, surrounded by a team of people holding spray guns, where she stood for 15 minutes while the Fabrican team sprayed a white substance onto her body to form the outline of a dress.

The material used to create the spray-on dress was developed by spray-on fabric technology company Fabrican, which was founded in 2003 by Spanish scientist and fashion designer Manel Torres.

Fabrican's spray-on fabric is a liquid made up of natural and synthetic fibres, such as wool and mohair, cotton, nylon and cellulose depending on the desired feel, that is suspended in a polymer solution. The liquid solution is sprayed by an aerosol or spray gun onto the body, which then evaporates as it makes contact with a surface to form a non-woven fabric.

After the shape of a dress was sprayed onto the body of Hadid, a Coperni employee began to cut and alter the white dress, shortening its length, adding a slit and draping the straps off Hadid's shoulders before she then walked around the room.

The material is said to have a suede-like texture and can be used to create, customise and repair clothes while also being strong enough to be re-worn and washed.

Following the show and over the weekend, clips from the show produced a number of viral moments. According to WWD, in the 48 hours after the show, the media impact value of the event was measured at 26.3 million dollars (23 million pounds), with 20.9 million dollars of that total attributed to social media. 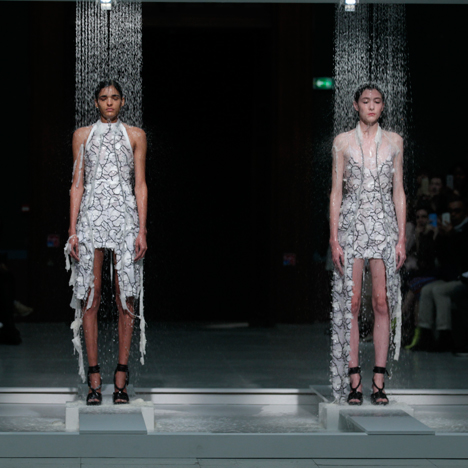 This data was obtained from Launchmetrics, a proprietary algorithm software that asses the monetary value of online posts, social media interactions and articles.

However, the construction and deconstruction of garments on the runway is not an unfamiliar stunt.

Coperni's closing event drew parallels from other fashion moments including Hussein Chalayan's Spring Summer 2016 show, where falling water dissolved clothing on the bodies of models to reveal dresses beneath, Martin Margiela's Spring Summer 2006 coloured ice cube accessories that dyed garments as they melted and Fredrik Tjærandsen's graduate collection of giant balloons that deflated on the runway to become garments.

In response to the show, fashion critic and Harper's Bazaar news director Rachel Tashjian wrote that "this was a gimmick, and nothing more."

Hadid wrote in a captioned Instagram carousel, where she detailed there was no rehearsal, that she was "still speechless". Others flooded to social media to express their witnessing of "fashion history".

The photography is courtesy of Coperni.