University of Cincinnati graduate Sangyu Xi has created Airy, a subtle brace designed for teenage girls with scoliosis that grows with its wearer and was named the US winner of this year's James Dyson Awards.

Described by the James Dyson Award as "the Invisalign of scoliosis braces" for its subtle design, the brace was invented to provide teenage wearers with an affordable but attractive brace to support their scoliosis – a condition that causes spinal curvature and often develops during puberty.

The James Dyson Award is an international competition that invites students and recent graduates to "design something that solves a problem".

Sangyu wanted to create an "off-the-shelf" brace that would specifically appeal to teenage girls with scoliosis, after learning that they make up around 84 per cent of adolescents with the condition.

Airy is made from patterned but discreet translucent polylactic acid (PLA), a type of bioplastic, and is available in small, medium and large sizes.

The pieces of PLA are arranged to create a brace that wearers fasten around their waist with a built-in belt, while perforations allow for adjustments.

Padding in a choice of five different colours can also be inserted into the brace if its wearer prefers a more striking look.

"I modified each side piece to be symmetrical so that people with left or right curvature can share the same brace," Sangyu told Dezeen.

"I also replaced the front closure with a three-point connection made up of a heavy-duty nylon cord instead of a noisy Velcro strap."

Sangyu's brace is designed to grow with its wearer for up to three years and is fitted with a smart device that monitors the wearer's development, which can be tracked using a dedicated app.

The designer said that while wearers can seek medical assistance with fitting their brace, Airy can also be assembled at home. 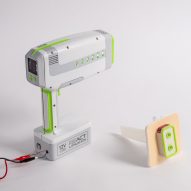 Sangyu explained that she was motivated to create Airy after learning about how scoliosis and subsequently wearing a brace can impact the state of many young girls' mental health.

"Current braces are designed with a very bulky and noticeable appearance, which is uncomfortable [to wear] and has caused a significant mental health issue in teenage patients by isolating them from their peers," she reflected.

"Airy, on the other hand, is intended to be subtle."

After wearers have outgrown their brace, the rigid parts can be recycled "up to 10 times" because no synthetic glue is used in the design process, according to Sangyu.

"I hope that [teenage girls] will feel like they're not wearing a brace but feel like they are [walking through] air, and wear the brace with confidence," concluded the designer.

Sangyu is a recent graduate of the University of Cincinnati in Ohio, currently working as an industrial designer. Other braces created for people with scoliosis include a 3D-printed design by UNYQ.

The images are courtesy of the James Dyson Award.