Young girls that suffer from spinal curvature will soon be able to wear lighter and more stylish 3D-printed braces to treat their condition.

The UNYQ Align is described as a "personalised, fashionable and breathable" back brace by its makers UNYQ.

The Seattle- and Seville-based company, which specialises in orthopaedic and prosthetic products, worked with 3D-printing pioneer Francis Bitonti and technology company Intel on the product.

Braces are a common treatment for scoliosis, which affects an estimated 6 to 9 million people in the United States.

"The condition typically develops in 10-15 year olds, occurring equally among both genders," said UNYQ in a statement. "Young girls, however, are eight times more likely to progress to a curve magnitude that requires treatment."

As members of this demographic can be particularly self conscious about their appearance, the goal was to create a more discrete brace that wearers would feel comfortable in. 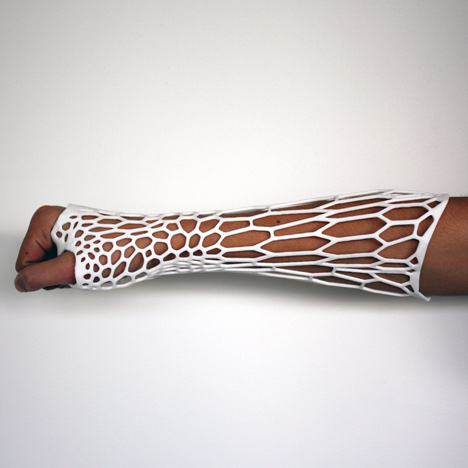 Typically, the apparatus has to be worn for up to 18 hours a day to be most effective.

"Traditional braces, which have not been advanced for half a decade, make it difficult for patients to reach the minimum recommended bracing period per day because they are constricting, bulky and perceived as unattractive," said UNYQ.

Using digital design and algorithms, Bitonti's studio was able to create a lattice that has 75 per cent less material than its predecessor – the Boston Brace – but still provides the necessary support.

"The first patient to try it on was very happy that she could actually bend from her waist when wearing it," Bitonti told Dezeen, "something she had never been able to do before."

The brace is also embedded with tiny data-capturing computer modules developed by Intel, which allow the user to monitor their progress via an app.

It debuted during an event at the White House earlier this year, and was presented as part of the FashioNXT event in Portland last month.

"It's not everyday you see a medical device launch at a fashion show," said Bitonti. "UNYQ AlignTM demonstrates how innovative technologies, designers, and technologists can combine to revolutionise treatment of medical conditions and dramatically improve the lives of the people who rely on assistive devices."

UNYQ Align will be available from a select number of hospitals in the US from early 2017 through a charter programme.

3D-printing is being used for a variety of medical purposes. Similar to the brace, the technology has been proposed for lattice-like casts for fractured bones.

More complex applications involve printing replacements for missing sections of bone or whole body parts, and even internal organs – though the latter is still under development.