An exhibition in Copenhagen showcases work by students who were instructed to develop projects for extreme environments in order to come up with original design solutions not influenced by "castle in the sky" builds and architecture blogs.

It was curated by David Garcia, founder of local studio MAP Architects and an associate professor at the Royal Danish Academy's architecture and technology institute, where he teaches a masters course titled Architecture and Extreme Environments.

The exhibition showcases the result of students' work on the programme, which sees them live and work for weeks in harsh locations such as Alaska and the Gobi Desert.

There they must seek to build and test design prototypes that benefit the communities living in these challenging environments by harnessing the resources available and collaborating with local people.

Garcia said the aim of the course, as well as responding to climate change, is to give the students no choice but to produce original architecture – without the temptation to copy what they see online.

"I wanted to make my students start in a very difficult place where there is no precedent, pushing them to an extreme context so they have to think anew," he told Dezeen.

"It's partly based on the idea that it's hard for students to separate themselves from the images they see on the architecture blogs. These websites have an enormous impact on students, who crave inspiration, but it can be overwhelming as there is so much readily available."

He added that his own experience working on big-budget projects for rich clients while at major British architecture firm Foster + Partners was behind the conception of the course.

"I spent many years designing castles in the sky and that was pivotal in coming up with this programme," he said.

"I realised that from a resource perspective, and from the point of view of solving the world's problems it was ridiculous. I'm extremely critical of those types of projects despite having worked on them myself in the past." 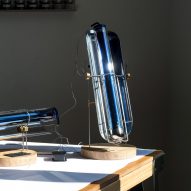 The exhibition starts with blown-up versions of pamphlets produced by MAP Architects exploring concepts for architecture in places like Antarctica, Chernobyl, or the Earth's orbit.

For instance, one pamphlet suggests that Antarctica's constant extreme cold be used to cool seeds in a World Seed Bank, as an alternative to the centre in the Arctic's Svalbard where air conditioning is sometimes required due to temperature fluctuation.

Among the projects featured in the main exhibition is a desalination device produced by a student placed with an Inuit community in the Bering Strait, where only saltwater is readily accessible.

Via a series of tubes and chambers, the device takes a block of saltwater ice and transforms it into a glass of fresh water overnight that can be drunk in the morning.

Meanwhile, the orange Inxect suit by Pavel Liepins aims to tackle issues of plastic pollution and food security in the Faroe Islands.

It channels body heat and humidity generated by movement into an attached habitat for plastic-eating mealworms, which are non-toxic to humans and rich in protein.

Some exhibits play with materials, such as an insulation product made out of pine needles by a student placed in Alaska and a method for creating bricks from sand by a student sent to China's Gobi Desert by Gabriele Jerosine.

Not all the projects worked successfully, including a device intended to wrap around the stilts of houses in flood-prone Manaus, Brazil, to produce tidal energy, which proved to be overcomplicated and too fragile to function.

"Personally I don't care whether their experiments work or not, and I don't have a specific aesthetic that I look for; that's not as relevant to me, I'd like the students to explore their own aesthetics," explained Garcia. 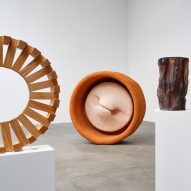 "What I care about is that the students are working with the goal of improving the environment in mind, and doing so in a way that is unique to them," he added.

Garcia's own work also features, in the form of a passive heating tent developed for the Atacama Desert in Chile where temperatures get very high during the day but drop dramatically at night.

The tent uses a self-activating piston to expose a stick of soapstone, an efficient thermal accumulation material, to the sun to be heated during the day before being withdrawn into the tent at night where it gradually radiates heat to provide warmth.

Some projects produced by students on the course – which has an intake of between 20 and 25 each year – have worked so well that they have been left for use by the community.

One such example is a project that used urine's electrolyte properties to power a toilet light in rural Zanzibar, to enable women to feel safe using it at night.

New Methods for Big Challenges: Architecture and Extreme Environments is being held in CAFx's space at Halmtorvet 27 in Copenhagen's Meatpacking District and runs until 20 November.

Copenhagen Architecture Festival is running a series of events across Copenhagen and Aarhus, mainly between 6 and 16 October 2022. See Dezeen Events Guide for an up-to-date list of architecture and design events taking place around the world.

The photography is by Francesco Martello.