Greek artist Andreas Angelidakis has scattered soft, digitally-printed temple ruins around the Espace Niemeyer in Paris for his Center for the Critical Appreciation of Antiquity exhibition.

Angelidakis' aim for the exhibition, his first solo show in Paris, was to explore different types of archaeology and how histories can be erased if they don't fit the archaeological canon.

"I was interested mostly in all these 'other' histories," he said. Personal histories, rumours, superstitions – that come from antiquity, to see what kind of history they construct and how they allow us to look at the past, but also the future in a different way."

Center for the Critical Appreciation of Antiquity is on show at Espace Niemeyer – a building designed by Brazilian architect Oscar Niemeyer in 1965 as the headquarters for the French Communist Party.

"I thought it was a really sensational and transcendent space," he said of Espace Niemeyer. "It's like the Jetsons, it's a future that never really happened."

The exhibition was inspired by Angelidakis' research into the history of the Greek temple of Zeus in Athens and features "marble" Ionic columns made from printed fabric on foam blocks.

A centerpiece comprises scaffolding hung with a digitally-printed column, a nod to the tradition of placing columns in cities as places of protection.

"One of the superstitions that fascinated me was that the columns were considered apotropaic elements," Angelidakis said.

"So they would keep away the evil from a city," he added. "The way that people would organise habitations is that they would place a column in the centre and make a circle around their animals, and whatever was in the circle was protected."

"This being a round space, it just made sense to put a column in the middle to protect us all."

The exhibition, which was commissioned by luxury watch brand Audemars Piguet for its Contemporary program, also looks at Angelidakis' personal history as a queer man coming of age in Athens.

Antique-style columns were often used to decorate summer discos in the Mediterranean and became a mainstay at gay clubs in the city in the 1980s, the artist said.

For the show, he juxtaposed them with kitschy Greek statues in different stages of transforming into columns themselves, as well as with a music-video-style film of dancers and bright disco lights that transform the sleekly modern interior. Large, soft books tell contemporary LGBTQ+ stories. 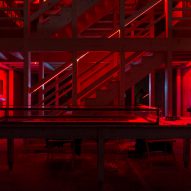 "With respect, Niemeyer's is a space that could take a bit of queering," Angelidakis said. "Niemeyer was perfection, completed perfection – no room for much interpretation."

"Of course, those were the times," he added. "It's also a fabulous space; I was excited because it fits perfectly with my science fiction, antiquity, Barbie-doll obsession."

The show was designed to be immersive and Angelidakis hopes that visitors will interact with it – move its lightweight foam pieces around, climb the soft ruins and sit on the sofas and rocking chairs that fill the space.

To create the spatial design for the Center for the Critical Appreciation of Antiquity exhibition, he drew on his knowledge of digital design.

"I stopped designing physical buildings in the early 2000s and started to work online to create virtual experiences for architectural spaces," Angelidakis, who trained as an architect, told Dezeen.

His soft "marble" blocks draw on both the contrasts and similarities between digital and analog spaces.

"The idea of the soft ruin is that it's literally soft, but also software ruins," the artist said. "These refer to the time when I was doing online spaces, where texture mapping is the most typical thing to make something look correct."

"You take a simple volume and apply a photograph, which is how Minecraft and all video games are done," he added.

"I wanted the [blocks] to be lightweight, so that it's almost as if you're moving them around in the space in Minecraft. The space is meant to look like a computer render."

Angelidakis' previous work includes his Cruising Labyrinth, which was on show as part of the Cruising Pavilion at the 2018 Venice Architecture Biennale.

The photography is by Julien Gremaud.

Center for the Critical Appreciation of Antiquity is at Espace Niemeyer from 11 to 30 October. See Dezeen Events Guide for an up-to-date list of architecture and design events taking place around the world.