Architectural scientist and designer Mae-ling Lokko used bio-based materials, including mycelium and coconut waste, to create this installation focused on ideas of economic and ecological justice at Belgium's Z33 gallery.

Grounds for Return was Ghanaian-Filipina designer Lokko's first European solo exhibition and was displayed at the Z33 House for Contemporary Art, Design and Architecture in Hasselt, Belgium.

The exhibition, which features on the shortlist for the installation design category at Dezeen Awards 2022, examined the notion of sites and spaces of extraction, with a focus on how slaves and food were historically shipped out from West Africa.

"At a time when the world is questioning and examining our historical and contemporary patterns of extraction and destruction, I believe this exhibition's theme of 'generative justice' looks directly at iconic sites of extraction and offers pathways of returning value and instilling hope," Lokko explained.

Through her research at Yale University's School of Architecture, and her company Willow Technologies, based in Accra, Ghana, Lokko works with agricultural waste to create affordable bio-based building materials.

Grounds for Return highlighted the cycle through which crops and dwellings can rise out of the ground to support the land and community, before biodegrading and returning nutrients to the soil.

Imagery and materials referenced the physical and psychological processes that contribute to these cyclical value systems.

The visitor's journey began with a threshold influenced by the Doors of No Return found at encampments on the West African coast where slaves were loaded onto ships.

Lokko created a gateway using wall panels made from the textured husks of coconuts. These hard shells, covered with wiry fibres, are typically discarded as part of the process used to produce coconut water and cosmetic products.

Another part of the exhibition, Healing Meadow, focused on the properties of fungal organisms, which play an important role in enhancing soil and supporting plant systems.

The artwork comprised a landscape that recalled the shapes of mushroom caps. It was created using modular panels made from mycelium – a biomaterial that forms the root systems of fungi.

The undulating installation was inhabited by various species of herbs that are traditionally grown for medicinal purposes. The plants were harvested throughout the exhibition's duration as part of a series of educational workshops.

Different mycelium panels moulded into more angular forms were installed on the walls of a tunnel connecting the area dedicated to farming with a space focused on dining rituals.

The narrow corridor provided just enough space for one visitor at a time to pass through, bringing them close enough to experience the smell of the material, as well as its visual and acoustic properties.

The final part of the installation was The Elemental Table, designed in collaboration with Ghanaian culinary artist and chef Selassie Atadika. 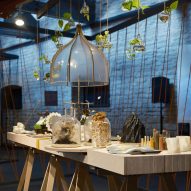 Developed by Lokko during a residency with sculptor and artist El Anatsui, the table re-established traditional methods for preparing and eating food that have been largely displaced by modern kitchens and cooking practices.

The table itself was formed of apampa market trays, which women typically carry on their heads and place on surfaces to sell food.

Lazy Susans integrated into the table encouraged communal dining and sharing of food, which is an important aspect of food culture in Ghana. Smaller vessels placed on the table contained herbs, seasonings and spices.

"The return to the communal table comes full circle to represent an important step toward reconnecting the act of eating with acts of food production," Lokko added.

Other installations featured on the shortlist for Dezeen Awards 2022 include a representation of a sinking house designed to highlight the dangers posed by climate change, and a pavilion made from glass blocks that celebrates the culture and tradition of Greenland.

The photography is by Selma Gurbuz.

Grounds for Return took place between 26 September 2021 and 09 January 2022. See Dezeen Events Guide for an up-to-date list of architecture and design events taking place around the world.