Rolls-Royce has unveiled its first all-electric car, the Spectre coupe, as the luxury brand promises to go fully electric by 2030.

According to Rolls-Royce, Spectre is its first car to be conceived and engineered from the beginning as an electric vehicle, and signals that electric technology has reached the stage where it is powerful enough for its luxury vehicles.

Rolls-Royce CEO Torsten Müller-Ötvös described the two-door coupe as being "the most perfect product that Rolls-Royce has ever produced."

"Spectre possesses all the qualities that have secured the Rolls-Royce legend," said Müller-Ötvös. "It is perfectly in tune with the sensibilities of our time. It states the direction for the future of our marque and perfectly answers a call from the most discerning individuals in the world to elevate the electric motor car experience."

Set to ship to customers starting in the fourth quarter of 2023, Spectre is said to be a "spiritual successor" to Rolls-Royce's current Phantom coupe, particularly in its "indulgent proportions" and headlight layout.

Its exterior is partially inspired by modern yachts in its lines, tapering forms and its use of reflection to bring the surrounding environment into the design and add to a sense of fluid motion when the car is on the road.

The design makes Spectre Rolls-Royce's most aerodynamic car ever, with a drag coefficient of 0.25cd, which is on the low end for cars and means it will use a minimal amount of power to push through air.

This is aided by the car's streamlined fastback design, meaning it has a single slope from the roof to the tail. The body panel making up the rear of the vehicle is Rolls Royce's largest ever, giving it a seamless surfacing that contributes to the low drag. 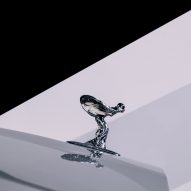 The brand's signature Spirit of Ecstasy figurine that sits on the front of the vehicle has also been honed over 830 hours of modelling and testing to make it more aerodynamic.

Other features that give Spectre a distinctive look include its prominent front grill, which will be softly illuminated after dark to give the car a "subtle and three-dimensional night signature".

It is bookended by headlights, which are set back in "jewellery box-like" darkened chrome housings, as well as more subtle daytime running lights.

At the rear, the taillights are uncoloured and clients can choose their own colours during commissioning.

The design of the interior is focused on illuminated surfaces that draw inspiration from the night sky. The options for customers include Rolls Royce's Starlight Doors, which incorporate 5,876 softly illuminated "stars", and Illuminated Fascia, which similarly light up the passenger side of the dashboard.

The car's functions are managed via a digital dashboard that Rolls-Royce calls Spirit, while an app called Whispers allows users to interact with car remotely.

Spectre is built on an all-aluminium spaceframe architecture that Rolls Royce first developed for the 2003 Phantom and has since honed for the electric era.

The carmaker says the final power, acceleration and range figures are still being refined but preliminary data shows a range of 520 kilometres and acceleration of 0 to 60 miles per hour in 4.4 seconds (0-100km/h in 4.5 seconds) from its 430-kilowatt-hour powertrain.

Alongside the reveal of Spectre, Rolls-Royce has confirmed its entire range of products will be fully electric by 2030.

It says some of its cars' defining characteristics — like "instant torque, silent running and the sense of one imperceptible gear" — are elements that will only be enhanced by electric technology.

Rolls-Royce has been a wholly owned subsidiary of the BMW Group since 2003 and is headquartered at the Goodwood Estate in West Sussex, England.

Ahead of the Spectre launch, it updated its visual identity with a redesign by Pentagram, and then more recently, the Spirit of Ecstasy figurine.