British car brand Rolls-Royce has redesigned the female figurine that adorns its bonnets as part of its effort to make its electric vehicles more aerodynamic.

The Spirit of Ecstasy figurine, which has appeared on the majority Rolls-Royce cars since 1911, has been shortened and slimmed with the model now cast in a lower position thanks to a bend in both knees.

The streamlined figure will appear on the company's upcoming electric car, which it described as the "most aerodynamic Rolls-Royce ever created".

"In her new form she is more streamlined and graceful than ever before – the perfect emblem for the most aerodynamic Rolls-Royce ever created, and for gracing the prow of our bold electric future," said Torsten Müller-Ötvös, chief executive officer at Rolls-Royce.

Named The Spirit of Ecstasy, the figurine of a woman leaning forward with her robes blowing in the slipstream behind her was designed by sculptor Charles Robinson Sykes and has been updated several times over the past 111 years.

To make the current figurine more aerodynamic, the new Spirit of Ecstasy was reduced in height by 17.28 millimetres to 82.73 millimetres tall.

To achieve this, the Spirit of Ecstasy was cast with a bend in her knees and one leg forward. Previously, she stood with straight legs and her feet together, with a tilt at the waist.

The figure's robes, which are sometimes mistaken for wings, have also been reshaped to make it "more aerodynamic and realistic" Rolls-Royce said.

The redesign was launched to mark the brands electrification plans, with Rolls-Royce set to create only electric vehicles by 2030.

It will first appear on Rolls-Royce's electric Spectre car, which will be launched in 2023, before being rolled out on all of the company's new cars.

"The earliest Spectre prototypes have a drag coefficient of just 0.26, making it the most aerodynamic Rolls-Royce ever created," said Rolls-Royce.

"The figure is expected to improve during the product's exhaustive testing protocols undertaken in 2022." 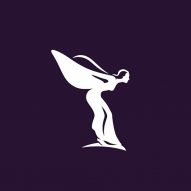 The Derby-based company's figurine has remained largely the same shape since its launch, with most changes focused on reducing the figurine's size.

The last major change occurred between 1934 and 1959 when the woman was depicted as a kneeling figure. Customers could choose whether to purchase this model or the traditional model.

The designers based the form of the updated figurine on an original drawing by sculptor Sykes. This drawing was digitally mapped to create a 3D computer-generated image, which was adapted to create the final form.

"The figurine has been remodelled with a lower, more dynamic stance that brings her much closer to the drawings made by her original creator," added the brand.

The figurine has been a key part of the company's branding since it was first introduced in 1911.

In 2020 Rolls-Royce revealed a new visual identity created by Pentagram which made the Spirit of Ecstasy emblem its main logo.