Architecture practice DGN Studio has extended a terraced home in east London with spaces and materials that form a backdrop to the client's mid-century furniture collection.

The brief for Magpie House initially focused on opening up the ground floor of the north-facing home, before expanding to encompass a renovation of its first floor, with the client's furniture and fittings incorporated throughout.

On the ground floor, DGN Studio has extended the kitchen by three metres into the rear garden to create a large dining and cooking area.

Accessed by stepping down from the front living room, it is illuminated by skylights between wooden beams and features a concrete window seat overlooking the garden.

An internal opening between the living room and kitchen diner creates a new visual axis that cuts through the entire home, intended to better unify the interior.

On Magpie House's first floor, the original arrangement of three bedrooms and a bathroom has been reconfigured to provide a new bathroom, landing and two larger bedrooms, with the possibility of reintroducing the third in future if desired.

"Working first on the principles of spatial planning and natural light, DGN Studio redesigned the existing ground floor plan to encompass a more cohesive and seamless sequence for living, dining and cooking," said the studio.

"Connection to the garden was central to the brief, met with the addition of a cast concrete and dark stained oak window seat at the rear elevation, the glazed panels of which can be entirely opened to offer a seamless flow from dining area to garden." 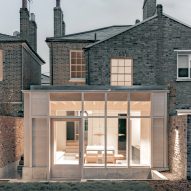 Finishing touches to the kitchen include wooden storage units and a stainless steel countertop that divides it from the dining area, where exposed brickwork extends to create low areas of shelving.

Upstairs, white walls and a reclaimed wood floor create a minimal backdrop for the client's furniture, while a wood-framed screen with translucent glass separates the large landing from the family bathroom.

"The requirement for an economic and functional kitchen is accommodated by large joinery pieces for plentiful storage, all designed to work around items that were already in the client's possession such as the oven and hob," said DGN Studio.

"Stainless steel counters and splash back act as the main material of contrast against ash cupboards and open shelving. These extend to a larger, stainless-steel unit that conceals the extract at high level."

In Magpie House's garden, reclaimed malting tiles have been used to create an external seating area. This leads up to an area of gravel topped with repurposed metal mesh panels, which connects to a small studio building at the end of the site.

DGN Studio was founded by Daniel Goodacre and Geraldine Ng in 2016. Also in east London, the studio recently completed another extension project that has a bright open kitchen and dining space with a sunken concrete floor and skylit ceiling.

The photography is by Tim Crocker.