Mexican architecture firm P+0 has completed a home on a steep hillside in Monterrey, using smaller volumes clustered together to form the resident's living spaces, which was captured by photographer Edmund Sumner.

The project was completed in 2021, and is named after the primary volumes that make up its angular appearance. The Los Cubos residence encompasses 646 square metres and has an inverted layout that makes the most of its steep site in Monterrey.

P+0, a local firm founded by architect David Pedroza Castañeda, designed the home as a cluster of several smaller "pavilions" that intersect in key moments to create larger spaces for the family's communal use.

On the main floor, which is actually the uppermost level, the studio placed the home's kitchen, living and dining rooms. These surround a courtyard one storey down, where a tree grows.

Locating these spaces on the top floor gives the spaces the best views of the surrounding hills, including a well-known local mountain, the Cerro de la Silla.

Outside the sliding glass doors that front the living room, the architecture studio built a pool into the rooftop.

"These 5x5 towers are thought of as pavilions that house the program by occupying the small clearings in the forest," said Pedroza Castañeda.

"The arboreal mass of local trees gives privacy to the house, blocks sun exposure and becomes the space’s protagonist," he added.

A monolithic concrete stair leads down to the bedroom level, which is organized around the central courtyard.

On this level, a family room opens onto the courtyard, which helps connect the bedrooms to the outdoor space.

"A series of transparent passageways communicate independent spaces while allowing the visual continuity between the different patios and gardens," the studio added. 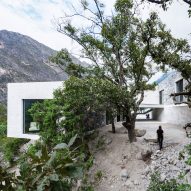 The base of the towers comprises mechanical space that is used by the rooms above. In one of the volumes, P+0 included a multipurpose space, to try to make the most of the available footprint.

This space is accessed via a secondary staircase that connects all levels of the home.

P+0 selected a stark material palette for the project.

The structural concrete and concrete block that forms the primary structure were left exposed throughout the building.

"Concrete and insulated white block form the solid walls of the towers while glass and steel allow for uninterrupted views and a connection with the exterior spaces and vegetation," said Castañeda.

This is offset within some of the living spaces by wood-covered floors and ceilings. In circulation spaces, the floors were left as exposed concrete.

Monterrey is among the largest cities in Mexico and is the capital of the state of Nuevo León. Other residential projects that were completed in the area include a holiday home made from a single pink-coloured material and a minimalist home by the Spanish and Mexican firm Cadaval & Solà-Morales.