American studio Sarah Jefferys Architecture + Interiors has renovated a slender townhouse in Brooklyn with airy rooms and a cedar screen on the facade to meet Passive House standards.

Located in the Park Slope neighbourhood, the Passive House project involved the overhaul of a brick-faced, three-storey townhouse built in 1921 and owned by a family of four.

To significantly reduce heating and cooling needs, the team installed triple-pane Zola windows, which are often used in passive houses. Walls were reconstructed to create an airtight envelope, which included the addition of cellulose insulation.

The team also added an electric heat pump and an energy recovery ventilator, which helps purify the air.

The front facade was kept intact and refurbished, while the rear wall was redesigned to add ample glazing. To provide privacy and to modulate incoming daylight, the team added an artful cedar screen that acts as both "a sculpture and a veil".

Within the slender home, the team incorporated pops of colour and pale materials such as white oak.

"We strategically used light hues and reflective materials, and created an airy environment to offset the narrow footprint of the townhouse," the team said.

The ground level has an open plan and holds the communal spaces.

Up front is the living room, where one finds a blue Living Divani sofa, rattan chairs from Fritz Hansen and a Muuto table.

A wood-burning fireplace, an element not often found in passive homes, sits between the living and dining areas.

To curb emissions from the hearth, the architects added a triple-pane glass enclosure and an extraction fan with an insulated cap. Still, because of the fireplace, the home does not fully meet the PHIUS certification requirements, the architect said.

The all-white dining room is furnished with Ant chairs by Arne Jacobsen and a PH50 pendant by Poul Henningsen. Just beyond is the "showpiece kitchen", which is framed with an LED light cove.

"The light cove acts as a separation point – an outline – and provides an atmospheric glow throughout the kitchen," the team said.

In addition to the special lighting, the kitchen features slatted wooden cabinetry, yellow pendants by Louis Poulsen, and an island topped with Glassos crystallized glass.

Part of the island consists of a live-sawn slab of white oak, which is lined with bar stools.

"The beautiful juxtaposition between Glassos and white oak exemplifies the nature of the kitchen as both a practical work area and a leisurely lounge space for entertaining," the team said.

A sky-lit staircase leads to the upper levels. The first floor holds the main bedroom and bathroom, along with an office – all of which are arrayed along a corridor lined with frosted glass. 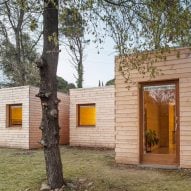 The main bedroom features a BoConcept bed, sconces by Robert Dudley Best for Bestlite and a graphic blanket by Pia Wallén for HAY. The bathroom is adorned with matte glass and penny-round tiles from Ann Sacks.

The office is infused with a "touch of nostalgia". Pieces include a Hans Wegner armchair, a teak Danish dresser and a 1962 copper pendant by Jo Hammerborg.

The top level contains a den and two additional bedrooms. The house also has a cellar.

Other Brooklyn townhouses include a house by Space4Architecture that has a skylit staircase and minimalist decor, and the family home of architects Fanny and Matthew Mueller, which features floating steps and a wood-and-steel bridge.

The photography is by Morten Smidt.