American architecture studio SOM has released designs for 8 Shenton Way, a supertall skyscraper in Singapore that will be the city's tallest and has a design that was informed by bamboo forests.

Designs for the 63-storey skyscraper show a stepped structure rising from a plant-filled base, with a series of voids along the facade that were designed to resemble a "bamboo forest", according to the studio.

At 305 metres tall, 8 Shenton Way will be the Asian city's first supertall skyscraper – defined as a structure that measures between 300 and 600 metres in height.

Located between the Central Business District and Marina Bay sections of Singapore, the tower will hold offices, luxury residences and retail. It is designed by SOM and developed by East Asian firm Perennial Holdings Private Limited with DCA Architects of Singapore as the architect of record on the project.

"8 Shenton Way will be the newest landmark on the Singapore skyline – a next-generation tower for the city," said SOM consulting partner Mustafa Abadan.

The massing of the structure draws on the composition of bamboo forests. "The tower is inspired by bamboo forests – a biophilic design that echoes vertical elements found in nature," said SOM.

The studio added that engineered bamboo will be used for some aspects of the construction, though no specific details were given.

SOM also emphasized the "post-pandemic" aspects of the tower, which it said has a focus on the health and safety of the occupants.

These implementations will include contactless technology, anti-microbial materials and increased ventilation.

Renderings of the structure show a curved pedestal for the skyscraper covered in vertical louvres and stylised fans. Pagoda-like glass-and-wood-clad structures that will host public amenities protrude from the pedestal.

Structurally, high-efficiency glazing and concrete will be used, and SOM said that the concrete will contain a certain amount of "recyclable aggregates". 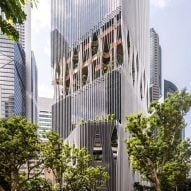 Alongside the engineered bamboo and glazing, the facade will have terracotta accents.

Seven landscaped terraces will be spread throughout the height of the skyscraper, some available to guests of the hotel planned for the structure and some for the residents of the apartments.

"In total, the design includes more than 10,000 square meters of elevated, public green space – exceeding the entire footprint of the site," said the studio.

The lobby will funnel inhabitants into a multi-story atrium. Wood, terracotta and stone will be used for the interior program, and the lobby space will also have a reflecting pool.

The skyscraper has a prospective completion date of 2028.

The previous record for the tallest building in the city was also set by SOM, with the Guoco Tower at 283.7 metres, completed in 2016.

Green facades or sky gardens – facades that feature living plant life – have become immensely popular in the city. UK architecture studio Heatherwick Studios also designed and completed a tower with plants along the facade in Singapore.