New York City-based Maya Lin Studio and US studio Bialosky and Partners have designed a spiralling plant-covered performing arts centre for Bard College in New York that will sit next to Frank Gehry's Fisher Center.

Maya Lin Studio, which is headed by artist and designer Maya Lin, released a project rendering showing a grass-covered structure that spirals up from the ground level around a courtyard.

The 25,000-square-feet (2,322 square-metre) building will hold facilities for the Gehry-designed Fisher Center, which hosts a well-known residency program for the performing arts and opened in 2003.

According to Lin, the shape of the new arts centre was intended to connect the structure with the surrounding woodlands.

Despite the low profile of some aspects of the structure, double-height windows will be installed to create a biophilic environment for the performers who will use the five studios included in the program, which will be connected by "gathering hubs". 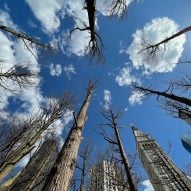 The central courtyard in the middle of the spiralling structure will also be used for performances and rehearsals.

"The sloping land will allow double-height studios to open fully to the meadow and woodlands, connecting artists, students, and faculty to the landscape while creating a unique and strong architectural presence," said Lin.

"We are designing a high-performance, energy-efficient, low-carbon building that will be sensitive to its site, reflecting my aesthetic and my concern for the environment," she continued.

Construction on Lin's design will begin in 2023 on the 20th anniversary of the Fisher Center.

"I have long admired the Fisher Center, and to be able to create a new building in close proximity to it allows me to create a quiet and respectful dialogue with Frank Gehry's magnificent work," said Lin.

"Frank was my teacher at Yale, and it's particularly meaningful for me to design this new building in relation to his."

Lin will design the building in partnership with Bialosky and Partners, and will also work with acoustic consultants Charcoalblue. 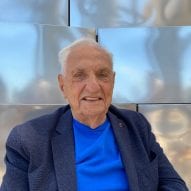 "Once completed, the building will expand the Fisher Center’s identity beyond the walls of Gehry's stunning landmark, to become a cultural campus comprising both the Gehry and Lin building," Bard College said.

Other recent projects by Lin include an installation of dead trees in Manhattan to raise climate-change awareness and  designs for a sculpture to be placed in the gardens of the Obama Presidential Center in Chicago.

The images are courtesy of Maya Lin Studio.