Weathering steel panels clad the exterior of this asymmetrical house extension that architect Nicole Blair lifted above a single-family home in Austin.

Called The Perch, the building was designed for a couple that wanted to expand their living space without sacrificing any of the existing backyard.

The structure is comprised of a steel volume with an irregular shape perched just two feet (60 centimetres) above the roof of an existing home.

Placing the 660-square-foot (61 square metres) structure directly above the existing house expanded the living area of the home. The top of the structure sits just below the city of Austin's allowable building envelope.

"Situated two feet above an existing bungalow, The Perch is a novel solution to a mundane project type, whose solution celebrates the bungalow below by setting itself back from it and hovering near it without disrupting it," said Nicole Blair, an architect based in Austin

To avoid disrupting the site's mature vegetation, the steel structure was assembled offsite and brought into place with a crane. This procedure avoided storing too many materials on site.

Visitors enter the building through an exterior steel porch, which shares a landing with the stoop of the primary residence. Inside, there is an open-concept kitchen, living and dining room that occupies roughly half of the floor area.

"Rooms have small footprints and vaulted ceilings for added volume, and the split-level form provides interstitial storage and mechanical space throughout," Blair explained.

A short flight of stairs leads to a hallway, where there is a room facing the back yard, and another facing the street. One is intended as a guest bedroom, while the other is used as a hair salon by one of the owners, who is a hairstylist.

The building is clad in weathering steel, a low-maintenance choice that the architect selected to match some existing landscape elements while complementing the main home below. Its ridged panels are laid at an angle to match the playful geometry of the roof line. 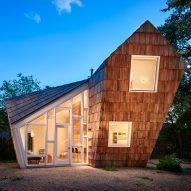 The interiors are colourful and bright, with tongue-and-groove wooden planks lining the walls and ceiling of the main living space, pink cabinetry in the kitchen and exposed plumbing fittings in the bathroom.

At the main entrance, the exterior wall is made of glass from floor to ceiling, helping to bring plenty of light into the space.

"A restrained yet playful material and color palate are carefully detailed with efficiency, economy, and serenity in mind," said Nicole Blair.

The Perch was longlisted in the residential rebirth project category of Dezeen Awards 2022.

Other home extensions throughout the USA include a bright blue building in Los Angeles by Assembledge+ and a low-slung desert building with earthen tones in Marfa, Texas.