Aruliden designed the streamlined wearable device for Whoop 4.0, a "fitness coach" developed by Whoop. It has been shortlisted in the wearable design category of the 2022 Dezeen Awards.

The Whoop 4.0 has features such as a sleep coach, oximeter and skin temperature sensor and was designed as a fabric band without a display to be more wearable.

"To accommodate the ability for users to wear Whoop 4.0 at all times, we revolutionized the design to fit every component into a streamlined body that's without a display – allowing users to easily swap out the band while keeping all the hardware in one waterproof unit that's barely felt or seen on the wrist," said Aruliden vice president of industrial design Brett Tom. 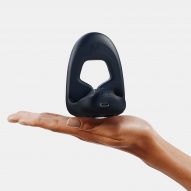 Unlike many other fitness optimisation wearables, Whoop 4.0 does not have a screen interface, and the technology relies on an app to transmit data from its sensors.

"The choice to omit a screen with a user interface from its design enables the product to become more subdued, immovable, and unrecognizable as a fitness-tracking coach, effortlessly blending into lifestyle," said Aruliden.

For the "sleep coach" function, the wearable interacts directly with the user, using "gentle vibrations" to wake up wearers at optimal times.

Green and infrared lights with five LEDs as well as four photodiodes help to measure the health metrics, which also include heart rate variability, via a proprietary algorithm that also accumulates and stores the data.

According to the team, a line of smart clothing is also being developed in order to distribute the technology over the body to collect even more data.

"When you have access to precise data, you can use it to make informed training decisions," said Aruliden co-founder Johan Linden.

"The challenge is that getting your hands on this data means tracking for 24-hours a day – workouts, rest days, sleep, and everything in between." 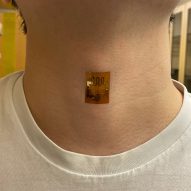 Whoop 4.0 is also said to be the first product in the world to use silicon anode battery materials from California-based materials firm Sila, which the team claims allows for five days of continuous use before needing to recharge.

Whoop was founded by Will Ahmed in 2011, and in 2013 approached Aruliden to help develop the technology into a marketable product.

Other wearable tech includes biofilm worn on the skin that is designed to power small electronic devices with sweat and a wearable sleeve that uses AI and electric pulses to help correct walking patterns after strokes and other debilitating illnesses.