Fashion designer Eleni Kyriacou drew on her experiences of exposing the abusive culture at the Bartlett School of Architecture to create her latest collection.

Launched last month, the Time to Rebuild fashion collection was developed by Kyriacou during the Covid-19 lockdown in Greece, where she lives.

It coincided with her expose of a culture of bullying, harassment, racism and sexual misconduct by staff at the Bartlett, which was recently the subject of an investigation into the school by legal consultancy Howlett Brown.

"This collection also came about at a time when I was involved with whistleblowing regarding discrimination at the Bartlett School of Architecture," Athens-based Kyriacou explained.

"I felt a new-found sense of confidence, certainty, and a desire to return to my architectural roots and explore fashion from a very architectural angle," she continued. "I wanted to very boldly design a collection that was architectural."

Kyriacou is a fashion designer who studied at the Bartlett in London from 1998 to 2002. Her best-known work includes costume design for the Rio de Janeiro Olympics in 2016.

Time to Rebuild comprises a dozen garments ranging from dresses to unisex pieces, designed to have an "experimental design without compromising on wearability".

They are unified by their consistent material palette and fragmented looks, which were achieved by overlaying opaque fabrics with mesh all sourced from her own stock due to lockdown restrictions.

Prior to the collection's launch, both Kyriacou and the Royal Institute of British Architects' president-elect Muyiwa Oki sported two of the garments to the Stirling Prize ceremony last month.

This was in reaction to RIBA declining her request to photograph the collection at its headquarters at 66 Portland Place, despite having already agreed on a price for venue hire.

According to the designer and a report by the Architects Journal at the time, the RIBA "didn't want to prejudice the Howlett Brown investigation into the Bartlett".

"I think it was recognised that Muyiwa had an opportunity to make a symbolic move, in that he is a break-away from the old guard and the old ways of the RIBA and is coming in as someone very fresh to reform and to advocate a new, desperately needed progressive agenda," reflected Kyriacou.

"I think he, like many, disagreed with the RIBA's choice to decline my venue booking back in January and wanted to therefore express that under his presidency a whistleblower or an activist on the side of right, will not be shamed or turned away, but welcomed and supported by the institution." 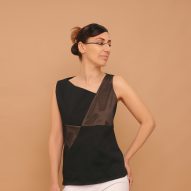 The garments in the Time to Rebuild collection all have a fragmented aesthetic, which was influenced by the Constellations – a series of 23 paintings by Spanish surrealist Joan Miró.

Kyriacou said she specifically drew Miró's use of lines in the artworks, which are used to link and create various shapes.

"[Miró] was addressing issues around equality, diversity and inclusion in the Constellations during the second world war," Kyriacou explained.

"It's simply timeless, political messaging that is as relevant now as ever. I was inspired by the way he used the line as a design tool, creating solids and voids, using it as a transformative and unifying factor, so I emulated that principle in the collection."

In her collection, Kyriacou has reinterpreted Miro's use of the line, using it as a symbol of her experiences in activism since exposing the abusive behaviour at the Bartlett.

"The line then took on a new meaning for me with the Bartlett activism, in that it became a symbol for interconnectivity between all the survivors of misconduct," she said.

This symbol runs throughout the narrative for the collection, also present in both the makeup the models wore in the photo shoot and the launch of the collection.

Instead of using a catwalk, Kyriacou's launch of Time to Rebuild took the form of a series of improvised dances, performed by students.

"These dancers that I used for Time to Rebuild are artists, and their artistic input, took my collection to another level and further amplified the themes that my collection explores through the medium of dance and performance," concluded Kyriacou.

The Howlett Brown report into the Bartlett found a "toxic learning and teaching culture" had gone on for decades at the school. Shortly before it was published, the school's former director Bob Sheil stepped down from his position.

At the time, architects responded to the news saying that the findings were "both shocking and completely unsurprising", with others highlighting that the issues identified at the Bartlett are widespread in UK architecture education.

The photography is by Ramon Gazhang unless stated otherwise.